“I was told initially that Arafa had been injured in an Israeli strike. Of course I was concerned, but many people get injured in his line of work and what was important is that he was still alive. I learnt only fifteen minutes before Arafa’s body arrived back at the family home that he had died. The shock was unbearable” 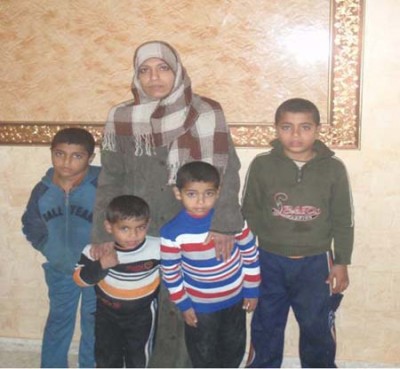 Arafa Abdel Dayem, 34, was killed on 4 January 2009, during Israel’s 23 day offensive on the Gaza Strip, codenamed “Operation Cast Lead”. Arafa, a medic, was responding to a missile attack on a group of five unarmed men when an Israeli tank fired a shell filled with flechettes directly at the group.

Meeting the al Dayem family one can’t help but notice the quiet and composed nature of the whole group.  It is obvious that the four boys: Hani, 11, Hamed, 9, Abdel Rahman, 6, and Ahmed, 4, have been impeccably taught by their mother, Imtihan al Dayem, 35, in the ways of politeness and good behaviour. The boys remain quiet and seated next to Imtihan at all times during the interview.

Imtihan recalls the events of that day, three years ago: “I was told initially that Arafa had been injured in an Israeli strike. Of course I was concerned, but many people get injured in his line of work and what was important is that he was still alive. I learnt only fifteen minutes before Arafa’s body arrived back at the family home that he had died. The shock was unbearable”. Imtihan’s voice breaks a little as she retells the moment she learnt of her husband’s death, but it is only a glancing moment of vulnerability in what is otherwise a strong face put on “for the sake of the children and their future.”

The family have faced challenges since the loss of Arafa. Due to a dispute with Arafa’s family, with whom they lived prior to the incident, Imtihan was forced to move out and into the unfinished house started by Arafa before he died. “When we moved in there was nothing, no furniture, no windows, no carpets, we only had the house painted ten days ago,” says Imtihan. Using Arafa’s savings she was able to pay off previous loans used to start construction on the house but did not have enough to finish it.

Reflecting on Arafa’s life before he was killed Imtihan talks of Arafa’s courage and popularity amongst Palestinians. “During the war, Arafa would only come home to deliver food to the family and then go out to volunteer with the medics again. If one medical crew was full he would look for others” says Imtihan. “We received condolences from all over the world when he died.” Unsurprisingly, “the importance of being strong” is something that Imtihan reiterates in her discussion of the family’s lives since the death of her husband.

The effect on the children on the loss of their father was particularly traumatic, especially Hani who, given his and his Dad’s close relationship, displayed physical and mental symptoms of extreme trauma in the year following the event. “But I have been upfront with the children that they will behave as their father would wish them to,” says Imtihan, and daily talking sessions with UNRWA staff in the period following the death of his father has meant Hani is now doing well in school and excelling in science, a field his father taught in the local UNRWA school. It is clear that Hani is filling the position of man of the house as he sits quietly with his mother and watches over his younger brothers. Ahmed, the youngest, was four months when Arafa died, “he did not have a chance to know or to love his father” says Imtihan.

Speaking of the future Imtihan is hopeful, “I have four young boys whom I hope to see graduate from college and get married, but I am only one, it is a huge responsibility and I must be strong.” She is also hopeful for prospects regarding legal proceedings in Israel concerning compensation for her husband’s killing given that Arafa was clearly not a military target at the time of his killing at the hands of Israeli occupation forces.

PCHR submitted a criminal complaint on behalf of the Abdel Dayem Family on 21 August 2009. To-date, no response has been received.