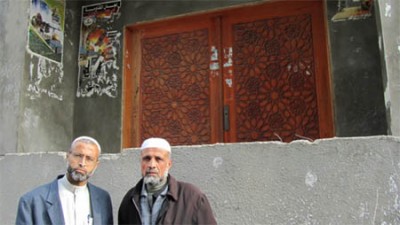 On 3 January 2009, at around 17:20, during prayer time, an Israeli drone fired a missile at the western entrance of al-Maqadma mosque in Jabaliya refugee camp. In the attack, 15 worshipers were killed and hundreds were injured.

“In every prayer I remember what happened in the mosque that day. I remember where I saw dismembered arms, legs and other body parts lying on the floor. I can still see our relatives and friends scattered around the praying room”, says sheikh Motee’ as-Selawy (49) as he puts his head in his hands. He was standing on the sheikh’s podium delivering a speech to the worshipers as the missile hit the entrance. “I had a direct line of sight to the door of the mosque and I saw pieces of red shrapnel flying towards us through the doorway,” he recalls.

The extended as-Selawy family, who live together in one big house opposite the mosque, lost five of its members, all of whom were praying in the mosque when it was attacked: Ahmad Isma’il (22), Mohammed Mousa Isma’il (12), Ibrahim Mousa Aissa (44), Hani Mohammed (8), and ‘Omar Abdel Hafez as-Selawy (27).

Motee’s brother, Ismai’l Mousa as-Selawy (53), lost his oldest son, Ahmad Isma’il, in the attack. “I cry every day for my son. I have been suffering a lot over the past three years. He was everything for our family. I visit the grave of my son once or twice a week at least. I remember him in every moment, whether I am at home, in the mosque or somewhere else”, says Isma’il.

“We miss our killed relatives on all occasions. Our family lives in the same building and we used to have a lot of fun together. Now we visit their graves”, adds Motee’.

Six members of the as-Selawy family were injured in the attack and several of them continue to physically suffer from shrapnel that remains embedded in their bodies. “I still have shrapnel in my right wrist and it gives me problems until now. Doctors in Gaza said a surgery to remove the shrapnel might to do more harm than good. I feel constant tingling and my right hand is weak. I can’t carry anything with it,” says Motee’. Another relative, Mohammed Khalil es-Selawy (14), has shrapnel embedded in his head, which caused him to lose his hearing requiring him to wear hearing aids. Brothers Abdel Karim Mohammad as-Selawy (12) and Maher Mohammed as-Selawy (13) also have to learn how to live with shrapnel embedded in their bodies; Abdel Karim has fragments in his shoulder while Maher has pieces in his liver. Tamer Khalil (22) and Mousa Isma’il (23) as-Selawy were also injured by shrapnel in their backs but doctors were able to remove the metal parts from their bodies.

“What affected us a lot psychologically is the fact that we were all praying in the mosque when we were attacked. The mosque is a place where we go when we need relief or when we are sad. We could never imagine them targeting us while we are praying in the mosque. That is a big crime,” says Motee’. The grandfather of the family, Mousa ‘Issa Mohammad es-Selawy (93), adds; “the mosque is the house of god. There are no soldiers or weapons in the house. Everyone comes to pray there and enjoy being there. How could they target it like that?”

Motee’ recalls, “Goldstone came to visit us in our house and went to the mosque with us to investigate. I asked him; ‘where do you go when you feel sad and tired?’ He said, ‘I go to a place for prayer.’ I asked him, ‘what if you were bombed there?’ Goldstone said; ‘I cannot imagine it. Such a crime should be punished.’ Now Goldstone now apologized for his report and we have not seen any results of the ground.”

Since the attack the as-Selawy is not only mourning the loss of its relatives. The family members are also struggling financially as three of their deceased relatives used to provide for a vital part of the family income. Ibrahim left behind 9 daughters, who still live at home. “Who will take care of them now?” asks Motee’. ‘Omar Abdel Hafez had 4 daughters and one son. Until the day of his death he earned the family income working as a cameraman with a local TV channel. Ismai’il’s son, Ahmad, was the father of two children, Mohammed (5) and Nisreen (3.5), and used to work as a tailor.

“My concerns now are mainly focused on my grandchildren, Mohammed and Nisreen, and how I can bring them up. I want to give them a future but I am too sick too work. My health was badly affected by the attack and the loss of my son”, says Isma’il, who suffers from severe migraine and stomach problems. “I try to take care of them as much as possible, but I will not be here forever”.

The as-Selawy’s tries to deal with the financial difficulties by themselves as much as possible. “We have our dignity but we are forced sometimes to receive aid from people because we need to live” says Motee’. “Besides prosecution of the perpetrators, we need financial compensation to deal with our current situation.”

The family has little expectations regarding the outcome of legal proceedings within the Israeli legal system. “The Israelis are prolonging the court proceedings and we don’t see any positive results. We may have hopes if our case is taken to an international court,” says Motee’.

PCHR submitted a criminal complaint to the Israeli authorities on behalf of the as-Selawy family on 2 July 2009. To-date, no response has been received.