“Madleen refuses to sleep by herself; she will only sleep in her parent’s room” says Nujoud, “she’s afraid to be by herself at all. The other day we were in the garden and I asked her to go to the bedroom to bring something. She refused to go without me.” 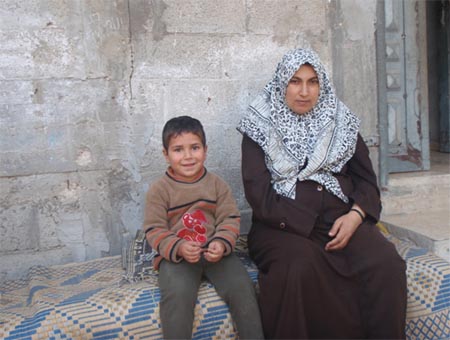 On 17 January 2009, at approximately 05:30, the area surrounding the UNRWA school in Beit Lahiya came under attack from Israeli forces. The area was bombarded using both high explosive, and white phosphorous artillery; white phosphorous is an incendiary chemical which ignites on contact with oxygen, its use in civilian populated areas violates the principle of distinction, and the prohibition of indiscriminate attacks. Nujoud Al Ashqar, along with approximately 1,600 others, was taking shelter in the school at the time of the attack. Nujoud sustained severe head injuries as a result of the bombing, and also losing her right hand. Two of her sons Bilal, 6, and Muhammed, 4, were killed in the attack.

When PCHR first spoke to Nujoud in the aftermath of the attack three years ago, her life had become extremely difficult, particularly her relationship with her husband, Mohammed. “At first my husband blamed me for the death of the boys. He used to threaten me every day that he would re-marry” says Nujoud, “but things have got better between us since the birth of our daughter Haneen. He loves her deeply and she loves him.”

Nujoud’s daughter Haneen, 1, was both a blessing and a severe challenge for Nujoud, who, despite being thankful she was able to give birth to another child after the loss of Muhammed and Bilal, is faced with extreme difficulties caring for herself, the household and her children given the loss of her arm and other medical difficulties following the attack. “I get most frustrated when trying to care for Haneen” says Nujoud, “I need help form my daughter Madleen all the time to care for her. I always feel sad for her because she sacrifices so much of her education to care for the house and her sister. But I need her to do it” says Nujoud. “Her grades in school have suffered as a result. It’s made worse by the fact I find myself with no patience to help her with her school work anymore since the attack.”

Madleen was herself in the UNRWA school at the time of the attack and faces difficulties with both the memory of that day and the loss of Bilal and Muhammed. “Madleen refuses to sleep by herself; she will only sleep in her parent’s room,” says Nujoud, “she’s afraid to be by herself at all. The other day we were in the garden and I asked her to go to the bedroom to bring something. She refused to go without me.”

Nujoud shares Madleen’s fear of the past and apprehension of the future. “Sometimes when there are rumours of a new war or Israeli incursions Madleen will start asking me about it and speaking of the incident. But I can’t bear to talk with her about what happened and I just ask her not to talk about it.”. The memory of the attack remains so moving for Nujoud that she does not speak with it to anybody. “Sometimes visitors will come over and ask to hear about that night. I don’t talk to them about it though. If I do I will spend the rest of the day and the whole night going over it in my head.”

Apart from the loss of one hand Nujoud has been left with severe pain in her head. When PCHR spoke to her three years ago she would wear her head scarf everywhere, including inside the house, as she had lost all her hair due to severe burns. “Now most of my hair has grown back” says Nujoud, “except for small patches due to injuries, but still when Madleen combs my hair I’m in agony.”

The loss of Bilal and Muhammed is especially painful for Nujoud. “I could never forget my children. If I stayed alive for 200,000 years I would not forget them.” Bilal and Muhammed were always a huge pillar of stability and support in Nujoud’s life. “When I used to get angry with my husband I would want to leave the house and go to my family. Bilal and Muhammed would calm me down and get me to stay. Now, when my husband and I argue, I just go to my room and think of them.” For Nujoud’s husband, Muhammed, who is deaf and dumb, the loss of Bilal, who used to help him communicate with others outside the house, was also devastating.

With another child on the way, Nujoud is hopeful for her health and for another baby boy in the future, who she also plans to call Bilal. “Me and my husband had been waiting for Bilal, he was so dear to our hearts, I hope to have a son so I can name him after his brother.”

PCHR submitted a criminal complaint to the Israeli authorities on behalf of the Al Ashqar family on 18 May 2012. PCHR have received an interlocutory response noting receipt of the original complaint. To date, however, and despite repeated requests, no further information has been communicated to PCHR, regarding the status of any investigation, and so on.