“We would stay up late at night talking with each other about what had happened over the day, we were brothers, if ever I needed anything I could go to them and they would help me out” 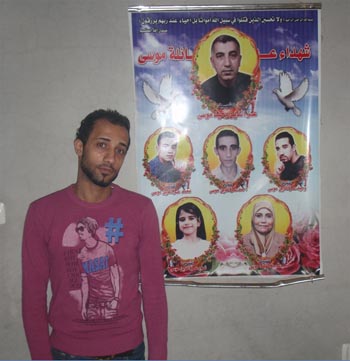 The physical scars caused by the attack are still clearly visible on 25 year old Muhammad Mousa. With nerve and bone damage in both his right arm and leg he has been left with a strong limp and his face displays patches of taut skin showing where he was burnt from the fire that engulfed his home. His injuries have left him unable to continue working in the local marble factory, leaving him unable to pick up the pieces of his life after losing his father, mother, sister and three brothers.

Like many who lost their homes during the offensive, Muhammad, has been forced to move frequently. He has moved  five times in the intervening period and, with another years rent due on his current home and no way to pay it, has not yet found stability and security. “After the attack I started rebuilding the destroyed home, but I couldn’t bear to live there, the incident would keep flooding back into my memory,” says Muhammad. “I went to live with my uncle, Hani, but he has a family of his own so I could not stay there.”

Emotionally, Muhammad has found himself hugely altered since the war and has had trouble sleeping since the incident. “At first I could not sleep at night at all, I would sit awake all night and might sleep for a while in the morning.” He now needs help doing basic things that others take for granted, such as preparing food to eat, which leaves him short tempered. “I lose patience very quickly, when I can’t do something myself I get hugely frustrated and become angry.” This is compounded by the sense of helplessness he feels regarding medical treatment for his injuries, which he says he was told by doctors is only available in Germany. He still requires extensive medical treatment on bone and nerves in his leg and for shrapnel wounds in his abdomen.

“I was in hospital for four months in Egypt (of which two and half months was in intensive care) without knowing the fate of my family. My sisters had initially told me that they were fine for the sake of my recovery. When I told them I was ready to come home they were forced to tell me the news that they had died, I immediately regressed and had to spend another two weeks in intensive care before being able to go.”

Muhammad has fond memories of his deceased brothers Wahid, Ahmed and Mohammad who he was very close to. It is clear he desperately misses their company. “We would stay up late at night talking with each other about what had happened over the day. We were brothers, if ever I needed anything I could go to them and they would help me out.” He says they are never far from his mind day or night, asleep or awake.

Muhammad shares the dreams of any young man for his future; he wants to get married, build a home, and one day have children. But he is sceptical his hopes will come true. “How can I provide for a wife and children, I cannot work, I cannot earn a living.” While he is optimistic about the outcome of legal action being taken on his behalf in Israeli courts he says what has been taken from him cannot be replaced, what he wants from the case is accountability for those responsible for his family’s death. “Money cannot replace what I have lost, I want to know why our home, which was nowhere near any military operations, was targeted, and why my family, who were not involved in politics, were killed.”

PCHR submitted a criminal complaint to the Israeli authorities on behalf of the Mousa family on 18 May 2009. To-date, no response has been received.