“The first two years I could manage but this year I have been suffering a lot from the loss of my mother. When I see girls from my school with their mother or talking about their mother, I miss my mother even more. I need to have her with me.” 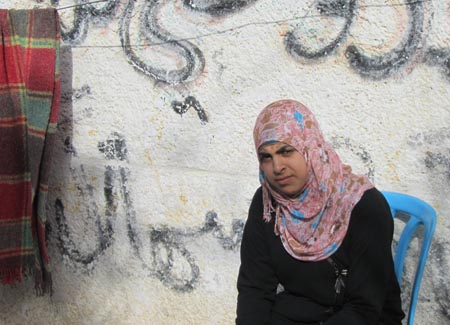 In the early morning of 13 January 2009, following two days of home demolitions, the Israeli army started to shell the village of Khuza’a and its surroundings, using high explosive and white phosphorous artillery shells. Israeli bulldozers, tanks and snipers were located on the edge of the village. At around 7:00 soldiers ordered the residents of eastern Khuza’a, to leave the area and move towards the centre of the village. Holding a white flag, Rawhiya al-Najjar (47) led a group of approximately 20 women in an attempt to leave as ordered. Shortly after the group turned the first corner a soldier shot and killed Rawhiya. Another woman in the group, Yasmin al-Najjar (23), was injured by two bullets when she tried to take Rawhiya off the road. Medical staff who tried to evacuate Rawhiya’s body were shot at and had to take refuge in a nearby house, and were only able to take the body from the street after more than 10 hours.

“I can still hear the bullet hit my mother in the head. I was standing right beside her when the soldier stepped into the doorway of the house ahead and shot her. I could see him,” says Rawhiya’s 17 year old daughter Hibba as she depicts the situation with her arms. “I keep wondering why they killed my mother while she was carrying a white cloth in the street, but why I was not killed when I was on the roof of our house earlier that morning.” Hibba still cannot make sense of what happened that day.

Hibba is an the only child. She lives with her father, Naser, his second wife, Nuha, and their three children. Her father married Nuha when it became clear that Rawhiya was not able to have any more children and convinced him to marry a second wife. Naser became unemployed after the full closure on the Gaza Strip was imposed. Now the family is dependent on aid and shared agriculture with relatives on lands next to the village, close to the border with Israel.

From the day of the incident Hibba and her family stayed away from the house for two weeks, saying it was too dangerous to move in that part of Khuza’a. For the two months after that they only went to their house during the daytime and spent the night at the house of relatives in a safer area.

Since the death of her mother Hibba suffers from nightmares, insomnia, stress, and bedwetting. “Before, I would sleep immediately. Now I can’t get to sleep at night,” says Hibba. Sometimes her father finds her sleepwalking and talking about her mother. Lately she has also begun to experience blurry vision and dizziness. When Hibba started to lose her hair a few months ago, Naser took his daughter to a hospital. The doctor told Hibba and her father that she needs to spend some time outside of the Gaza Strip. Naser is thinking of taking her to Egypt for a little while next summer. However, the closure and high costs make this option far from easy. Hibba says she would like to go out of Gaza but adds that “it will not make me forget anything.”

Hibba’s schoolwork has also been affected by the traumatic experience and death of her mother. “My mother used to help me with my homework and I used to be very good at school. Now my grades are lower and I am not able to focus in class. When I open a book I feel tired and remember my mother. Even when I study well for an exam, I often forget everything during the exam,” she says. Hibba enjoys subjects like Islamic religion and geography but feels sad knowing her scores have dropped a lot. This is the final year of high school for Hibba. However, she doesn’t think about what comes after the final exams next summer; “I don’t want to think long-term.”

Hibba does not like the month of January as it reminds here of the time of the offensive. However, she says 13 January is like any other day for her, “there is no difference with other days because I remember my mother every day regardless.” When she feels most sad she usually takes a chair and sits outside the house for a while. Sometimes talking to relatives and her best friend, who is also her neighbour, brings some relief. Hibba is glad to have such a good friend who tries to support her; “I can tell her everything. Without my friend I would have crumbled under the pressure of my loss.”

Hibba does not think about the future but rather relives what happened to her and her mother on 13 January 2009. “Since the morning I have been thinking a lot of the incident and how we left my mother in the street,” she says, having to pause after every few words. Many things in daily life remind her of her old life with and her future without her mother. “Whenever I see an old woman in the street I wonder if I will still have a clear memory of my mother when I am at that age.”

Discussing PCHR’s submission of complaints to the Israeli authorities regarding the killing of her mother, Hibba says she does not care: “Nothing can compensate for the loss of my mother but I wish that the soldier who shot my mother will be brought to justice.”

PCHR submitted a criminal complaint to the Israeli authorities on behalf of the al-Najjar family on 23 June 2009. To-date, no response has been received.