“If there is another war I won’t be moving, even if we die there, I don’t want to go through that again” 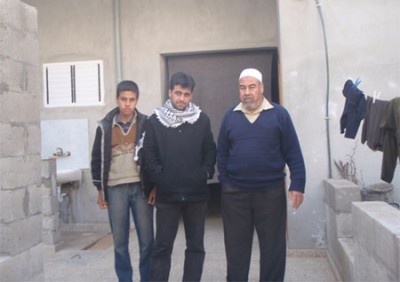 On 12 January 2009, the Ayad family home in the Zaytoon area of Gaza City was bulldozed by Israeli forces. Rezeq Ayad, 60, his wife Yusra, 58, and their four sons Mustafa, 16, Muhammed, 20, Abdel Kareem 26, and Khalil, 29, and Khalil’s two daughters were left homeless as a result of the attack. The family had left the area a few days prior to the destruction of their home, as a result of the intense Israeli bombardment of the area.

Speaking to Rezeq Ayad and his son, Abdel Kareem, the relief they feel having put their displacement behind them is clear. Now back in the family home – which they started rebuilding in May 2010 and moved into in October 2010 – the two are glad and thankful that the family are now safe and relatively secure once again. “I remember that time and I just thank God we are all still alive,” says Rezeq.

“We had left the house with nothing but the clothes we were wearing and a few blankets and mattresses,” explains Abdel Kareem, “we lost everything with the house when it was bulldozed.” In the aftermath of the attack the whole family were forced to find alternative shelter. “I and my wife moved to relatives in Asqoula in Gaza City,” says Rezeq, “my son Abdel Kareem was forced to move to the al Samouni neighbourhood and my son Khalil had no choice but to spend two years in a tent camp with his wife and young daughters.”

Rezeq’s son, Muhammed Ayad, who was 17 at the time, built a small structure among the ruins of the family home and stayed there so he could watch over the house and his donkeys, which he kept in the area.

Abdel Kareem and his wife Shaheera, 22, spent a little over a year in a makeshift hut that he built from corrugated iron and plastic. “My wife is from the al Samouni family; after the massacre of the al Samouni’s in that area during the war she didn’t want to move there out of fear of another attack taking place. But we had nowhere else to go.” Abdel Kareem describes the conditions the couple endured over that year as “intolerable.” “During the summer it was unbearably hot, during the winter, unbearably cold.”

Shaheera was pregnant with the young couple’s first child at the time the couple were homeless. “There was no running water or electricity in the hut. Shaheera would have to wait for me to come home from work to bring her water. Her pregnancy was very difficult. I was working selling vegetables and transporting goods to save money to build my house,” says Abdul Kareem, “the day we moved in my wife gave birth to my little girl Ru’al.” Reflecting on the incident Abdul stresses that he would be unwilling to put himself and his family through the same experience once more. “If there is another war I won’t be moving, even if we die there, I don’t want to go through that again.”

Khalil Ayad, his wife Nabila and their daughters Islam, 5, and Gadeer, 4, were also forced into haphazard makeshift accommodation after the attack. “Khalil went to a tent camp in the Zaytoon area of Gaza. There were a lot of families displaced during the war that moved there temporarily. But Khalil’s was the last family to leave. They spent two years there in total” says Rezeq. “They would collect firewood to cook and boil water and they shared a common well with the rest of the camp residents for water.” During this experience, Nabila gave birth to, Rezeq, now 1. Like Shaheera, Nabila’s pregnancy occurred under very difficult circumstances.

Talking of the future, Abdel Kareem’s hopes are simple. “I hope to be strong enough to continue my life and to be a good man” he says. As regards the families complaint with the Israeli government Rezeq and Abdel Kareem are dismissive of any potential for redress; “We don’t expect anything from the case. The house was a small home in a quiet residential neighbourhood. It was clearly not a military target. The soldiers knew what they were doing; they just wanted to destroy it. They will not investigate.”

Discussing how he was able to rebuild the family home following its destruction Rezeq explains that he had savings from his time as a school teacher in a local UNRWA school. Talking about what he had planned to do with the money he had saved over a lifetime, prior to spending it all on repairing the damage caused by the Israeli military, Rezeq says that he had hoped to help his sons with their marriage and their education. “I spent everything I had saved,” says Rezeq with a smile and a shrug of his shoulders, “so now I start again.”

PCHR submitted a criminal complaint to the Israeli authorities on behalf of the Ayad family on 2 August 2009. To-date, no response has been received.