“I wish that if our fate is to die, that we die together, I wouldn’t want anybody left to have to bear this sort of pain” 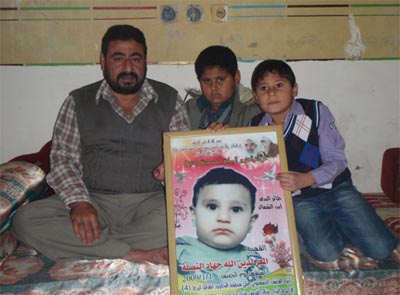 Jihad, Mu'tassam, and Zeid Nasla with a picture of M'uz Nasla, killed during the attack. (Photo: Palestinian Center for Human Rights)

On 1 January 2009 at around 15:00, Israeli military planes targeted a water tower across from the home of the Nasla family in North Beit Lahiya. The family were making lunch when the first bomb hit. As the family were trying to escape the smoke filled house, a second and third bomb struck the area, killing Ayoun Nasla, 6, and M’uz Nasla, 2.

For Ayoun and M’uz’s father, Jihad Nasla, the memory of what happened that day is especially distressing. “I found M’uz with his heart outside his chest and my daughter Ayoun with part of her skull missing and her brains spilt out,” says Jihad. “It is the night time, when I used to tell M’uz the stories of Abraham to get him to sleep, and when I go to visit their graves, when I most vividly recall the incident”. “I can no longer go into clothes shops to buy clothes for my children, I used to buy for three boys and two girl’s; I can’t bear to buy only for three”, added Fatima, 42.

The children’s mother, Fatima, has also given a lot of thought and attention to that fateful day. It is clear that she ruminates on the moments, days and years before the attack took place. “M’uz used to go to the balcony of the house every morning and say “good morning” to Majdal and Herbia, where our family is originally from, and every night he would say “good night.” The day he was killed he had said good morning but he never got to say good night,” says Fatima. “M’uz used to have a favourite resistance song he sang all the time, it reminds me so much of him anytime it is played, especially because it is played a lot on the anniversary of his death, which also happens to be the anniversary of one of the resistance groups.  The title of the song is now written on his grave.”

The family dynamic has been dramatically changed since the attack, a result of the stress they all share; the stress of one family member increases the anxiety of the others.  “My wife now cries every day, I have to try and calm her down every time and this has become a source of conflict between us,” says Jihad, to which Fatima adds: “I cry so often I feel my vision is now starting to be affected.” The children’s anxiety also feeds into the parent’s anxiety. “If Zeid wakes up in the middle of the night, when it’s dark, he starts to scream. I then wake up terrified something is happening” says Jihad.

The anxiety of the children is plain both from their parents discussion of the changes they have gone through since the death of their siblings, and their reaction to the unhappy topic of the discussion. “Mu’tassam was very calm until the incident. But he has started to become violent. His grades have also been lightly affected” says Jihad.

Talk of the future for the couple is largely filled with fear and doubt. “In the future I hope to live in peace with the Israelis, but I doubt this will happen given what the Israelis do to us” says Fatima. “I wish that if our fate is to die that we die together, I wouldn’t want anybody left to have to bear this sort of pain”. Jihad expresses similar feelings, “I am terrified that another attack will take more of us, when planes are flying overhead I tell my children to play so that we are distracted,” he says. “My hope is that the pain we carry will one day come to an end, but I don’t know how this is going to happen.”

PCHR submitted a criminal complaint to the Israeli authorities on 9 September 2009. To date, no response has been received.