“Before my mother’s death we used to be very happy on 1 January, have celebrations and visit people. Now we are all silent in the last hour of each year and on 1 January we don’t celebrate the new year. We visit our mohter’s grave. We remember.” 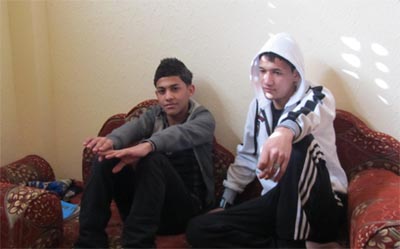 Around 23:30 on 31 December 2008, an Israeli warplane fired a missile at Najma Parc, a small green strip in the main street of the residential al-Shaboura neighbourhood in Rafah, killing two civilians and injuring dozens of others. Iman Abu Areeda (34) was one of the two casualties, killed by a piece of shrapnel that penetrated her brain. Seven members of the extended Abu Areeda family who were also in the house at the time of the attack were mildly injured by shrapnel. The Abu Areeda family was displaced for several weeks after the attack as the external walls in the front side of the house were destroyed. The internal walls and furniture were also damaged.

It was about half an hour before midnight on 31 December when electricity in the area was cut. Iman went to cover her youngest son, Mohammed, who was sleeping in his room. As she was leaning over him, the missile hit a few dozen meters away from their family home. The shrapnel that came through the outer wall killed her. Iman left behind her husband Mahmoud Abu Areeda (now 39) and their 7 children: Majd (20), Randa (19), Basel (18), Hibba (14), Islam (12), Watan (9), and Mohammed (6).

“My mother died when I was 15 years old. It was the age that I needed her the most. I was in shock and I couldn’t believe that she died. I still do not believe it. I felt like not going to school any longer but I pushed myself and kept going because I know she would have wanted me to do so,” says Iman’s second oldest son, Basel.

His siblings, Majd, Randa, Islam and Hibba have been badly affected psychologically by the death of their mother. Since the attack they prefer to be by themselves, isolated from the rest of their family. Randa, Islam and Hibba received psychological support from a local NGO to deal with their loss and the traumatic experience of the attack. After a while their family noticed they started to recover and were able to interact again with the people around them.

Iman’s oldest son, Majd, says the past three years have been very difficult for his family. “We were all scattered after the death of my mother. I was alive but I didn’t feel alive. It took me a long time to believe that she had died. I had a very close relationship with my mother as I was her eldest child.”

Majd was in his final high school year when his mother was killed. “I didn’t prepare for my exams as I was suffering a lot psychologically. I thought ‘even if I pass my tawjihi [final exams] my mother is not here to be happy for me’. I failed my tawjihi. I hope I can redo it again and succeed. My mom wanted me to be an educated person, to get married and to take care of my siblings. I hope that I can live up to her wish.”

His brother Basel also faced difficulties in finishing his high school exams successfully. “Before the death of my mother I used to get high scores but after her death my scores dropped. My tawjihi was a disaster but thanks to the help of my uncle, the brother of my mother, I made it and I am now in university. I’m studying journalism,” says Basel, holding one of his notebooks.

The character of New Year has been changed forever for the Abu Areeda family. “Before my mother’s death we used to be very happy on 1 January, have celebrations and visit people. Now we are all silent in the last hour of each year and on 1 January we don’t celebrate the New Year. We visit our mohter’s grave. We remember,” says Basel. Majd adds that “our sadness is not limited on 1 January and we miss her on all special occasions, like on Eid holidays. On those days I prefer to stay in bed and sleep all day.”

Since he lost his mother, thinking of the future makes Majd anxious. “I am afraid of losing someone else who is close to me. Now my father is the closest one and I am afraid something will happen to him. After the death of my mother I feel like I have a dead heart. When I laugh I feel as if I do something wrong, I cannot laugh when my mother is dead.”

Basel tries to look at the future with hope. The memory of his mother motivates him. “I think of the future quite a bit. I know my mother wanted the best for us so for the future I hope that I will be able to finish my study, find work, get married and to have a family and to be respected in the community. Nothing can compensate for my loss and sadness, having lost the most precious thing I hold in my heart, but I know what my mother wanted for us and that is what I will try to achieve.”

PCHR submitted a criminal complaint to the Israeli authorities on behalf of the Abu Areeda family on 2 July 2009. To-date, no response has been received.