Mustafa Tamimi, a 28 year old resident of Nabi Saleh, was shot in the face today, during the weekly protest in the village of Nabi Saleh. He sustained a severe injury to his head, under his right eye, and was evacuated to the Belinson hospital in Petah Tikwa. He is currently anesthetized, breathing through tubes, and his condition is described as serious. Tamimi is undergoing treatment in the trauma ward of the hospital, and is expected to undergo surgery later tonight.

A photo of the incident shows Tamimi at a distance of less than 10 meters behind the semi-open door of an army jeep with the gun aimed directly at him. Clearly visible in the photo is also the tear-gas projectile flying in his direction. 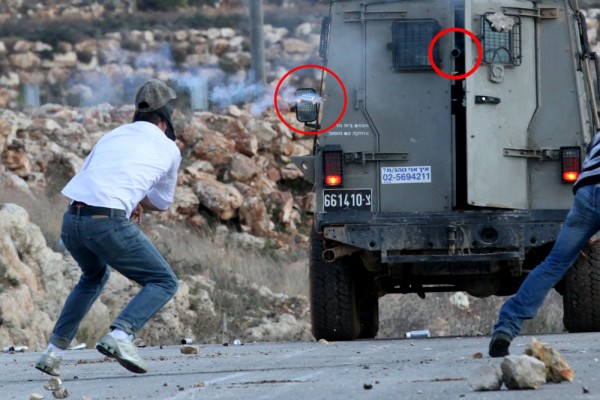 The incident took place in the West Bank village of Nabi Saleh today, when dozens gathered for the weekly demonstration in the village, protesting the theft of village lands by the adjacent Jewish-only settlement of Nabi Saleh. After the army dispersed the peaceful march, minor clashes erupted followed by a severe response by Israeli forces. Several people were hit with rubber-coated bullets and directly shot tear gas projectiles. Three were evacuated to the Ramallah hospital for further treatment. One protester was arrested.

The demonstrations, which have been held regularly for the past two years have seen hundreds of injuries to protesters by Israeli forces as well as dozens of arrests carried out with the aim of suppressing dissent.

Late in 2009, settlers began gradually taking over Ein al-Qaws (the Bow Spring), which personally belongs to Bashir Tamimi, the head of the Nabi Saleh village council. The settlers, abetted by the army, erected a shed over the spring, renamed it Maayan Meir, after a late settler, and began driving away Palestinians who came to use the spring by force – at times throwing stones or even pointing guns at them, threatening to shoot.

While the model of regularly held protests around the construction of Israel’s Separation Barrier became a common one in recent years, the protests in Nabi Saleh mark a significant break from that tradition, in that protest there is entirely unrelated to the Barrier. This expansion of the popular resistance model symbolizes the growing support the model enjoys among Palestinians, and the growing positive discourse around it across the Palestinian political spectrum.

Protest in the tiny village enjoys the regular support of International and Israeli activists, as well as that of Palestinians from the surrounding areas. Demonstrations in Nabi Saleh are also unique in the level of women participation in them, and the role they hold in all their aspects, including organizing. Such participation, which often also includes the participation of children mirrors the village’s commitment to a truly popular grassroots mobilization, encompassing all segments of the community.

The Israeli military’s response to the protests has been especially brutal and includes regularly laying complete siege on village every Friday, accompanied by the declaration of the entire village, including the built up area, as a closed military zone. Prior and during the demonstrations themselves, the army often completely occupies the village, in effect enforcing an undeclared curfew of sort. Military nighttime raids and arrest operations are also a common tactic in the army’s strategy of intimidation, often targeting minors.

In complete disregard to the army’s own open fire regulations, soldiers often shoot tear-gas projectiles directly at groups of protesters or individuals and rubber bullets are indiscriminately shot at protesters from short distances. The army has also resumed using high velocity tear-gas projectiles in Nabi Saleh, despite the fact that they have declared banned for use after causing the death of Bassem Abu Rahmah in Bil’in in April 2009, and the critical injury of American protester Tristan Anderson in Ni’ilin in March of the same year.

Tear-gas, as well as a foul liquid called “The Skunk”, which is shot from a water cannon, is often used inside the built up area of the village, or even directly pointed into houses, in a way that allows no refuge for the un-involved residents of the village, including children and the elderly. The interior of at least one house caught fire and was severely damaged after soldiers shot a tear-gas projectile through its windows.