New
Home / Gaza / Nedal, 14 years old, collected metal to support his family – they shot him from behind

Nedal, 14 years old, collected metal to support his family – they shot him from behind 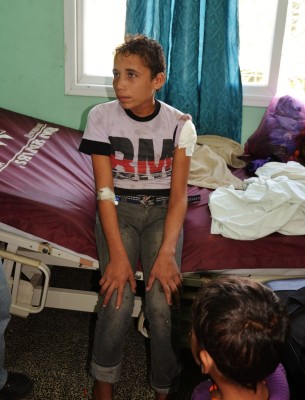 This morning at the Eretz border in Beit Hanoun, Israeli soldiers shot a 14-year-old boy, Nedal Khaleel Hamdan. We went to the hospital to meet him. We found him sitting on the bed with his left shoulder bandaged, surrounded by his family.

Nedal was collecting metal along with other boys in an area near the border. Often young people his age collect metal, then sell it to earn some money and help their families as well. At about 8:30 in the morning, Israeli soldiers started shooting at them; Nedal and the other fled, but while they were running Nedal was hit in the shoulder by a bullet.

He was transported on a cart to Balsam Hospital, which provided first aid, and was then transferred to Kamal Odwaan Hospital in Beit Hanoun. There the doctor told us: “We made an incision to remove the M-16 bullet. There is a total lack of supplies in the emergency room. We have to ration everything. People get a lot less medicine than they need. ”

Nadal’s recovery time will be a month. Fortunately, there have been no complications.

When we asked Nedal why he works there, told us: “We try to sell the metal to give our families the money they need to live.”

His father, Khaleel, has 16 children, and cannot work due to a problem in his legs. Lack of money forces his children to work in these dangerous areas, even if they do not earn more than 10 shekels for the sale of the metal. Sometimes his family depends on this money. Khaleel adds: “We live in a situation of injustice in Palestine and suffer from this occupation, but we want to work and need some way to make money. We hope that this occupation and the siege end soon and we can have a better life.”

How long can such crimes continue? Here they fire on children, while the world keeps its eyes and ears closed.