New
Home / Hebron / “Like the Wild West:” Ex-prisoner lives with bounty on his head

“Like the Wild West:” Ex-prisoner lives with bounty on his head

“I see my situation as a cowboy film, like the wild west” says Hani Jaber, showing ISM a poster, written in Arabic saying: ‘Wanted:  if anyone has any information about the whereabouts of the killer Hani Jaber, please call us on this number and you will receive a reward.’

The number goes through to an answer machine where the message instructs callers to leave a phone number, promising to guarantee confidentiality and to pay good money.  Other leaflets have been handed out showing pictures of Jaber and other recently released prisoners, offering rewards for information and leaflets for soldiers so that they can alert settlers if Hani passes through a checkpoint.  Reports in the Israeli media suggest that the reward is $100,000 for information on Hani’s whereabouts. 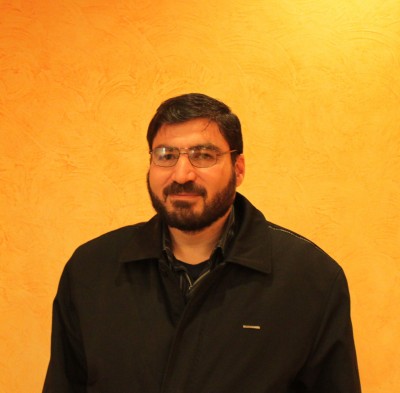 After serving eighteen years of a life sentence, Hani was released from prison on 18 December 2011, as part of the prisoner exchange deal which saw 477 Palestinian prisoners released in exchange for the release of Gilad Shalit, an Israeli soldier captured by Hamas in 2006.

In 1993, Hani, 18 years old at the time, took a kitchen knife and stabbed to death the settler Erez Shmuel, who Hani claims had attacked his nine year old sister as she came come from school.  Hani’s rage had built as he and his family experienced frequent attacks by settlers over many years.  Hani had his jaw broken during an attack by four settlers, on another occasion his leg was fractured.  His cousin, Aziza Jaber, was shot and killed by a settler as she was in labour and on her way to hospital – she was 30 at the time.

Hani was sentenced to life imprisonment and was kept in isolation for a total of five years.  He spent two years without seeing his family – the only person who could visit relatively regularly was his mother; his father only got permission around once a year to visit and he has a brother which he didn’t see for 18 years.

Despite his prison term, Hani looks strong and healthy, his beard neatly trimmed and hair carefully side-parted.  He seems calm and relaxed as we talk in a quiet corner in a nondescript café in Hebron.  However, Hani and his father, Rasami, are careful to sit with their backs to the wall where they can see the layout of the shop.  Rasami has rarely left his son’s side since his release from prison. “It’s a very difficult time, I’m afraid to leave him in case something happens – I stay with him or his brother stays with him to protect him.”

“I take the situation seriously” says Hani – “I don’t give any opportunities to anybody.  I believe that I won’t lose my happiness with my freedom but I should be afraid sometimes…I don’t have any weapons or anything to protect myself, I only feel safe when I am with my family”.

When he was released from prison, Hani was given clearance to travel anywhere in the West Bank.  However, a few days after his release, the police gave him a verbal order that he had to remain in Hebron for his own safety and that he had to sign in with the DCO (District Coordinators Office) every two months.  But Hani says that his confinement to Hebron makes him feel like he is living under huge pressure in a “big jail” and is more vulnerable from attacks.

He says that his primary fear is from Palestinian collaborators rather than from settlers or soldiers.  He is also fearful for his family, who have been attacked by settlers many times since his release.

Hani Jaber lives in secret location in Hebron for his own safety, it is too dangerous for him to return to his family’s home in Wadi Al-Hussain, a valley situated on the edge of Hebron’s old city.  Their house faces Kiryat Arba, an illegal Israeli settlement of around 7,000 people, a few hundred metres away on the opposite side of the valley.

The Jaber family’s house has always been a focus of attacks by settlers, due to its proximity to the settlement.  However, the attacks have escalated since it was announced that Hani would be released from prison.  The house was attacked on the day of his release and Ibtisam Jaber, 33, Hani’s sister-in-law, was beaten and suffered a miscarriage three days later.

“The settlers came and attacked the house.  Ibtisam lost her baby, nobody else was here because we were celebrating [Hani’s release]” said Moutasem Jaber, 21 – Hani’s brother.

On 19 November 2011 thousands of Israeli settlers and Zionists crowded into Hebron for Shabbat Chaye Sarah – celebrating Abraham’s biblical purchase of land on the site of the Ibrahimi Mosque.  The family experienced a surge in attacks; they were attacked around 10 times – at one point there was over 100 settlers outside the house.  They threw stones, urinated in the family’s well, and chanted “We will kill you” outside the house.  The soldiers responded by entering the house and forcing the family to stay in one room for seven hours.

According to Hani, the family’s shop has been attacked and the house has been attacked at least seven times since his release.  The Jaber family have reported the attacks and the threats to kill Hani to the police but they don’t expect any action to be taken.

“The government does not do anything against the settlers,” said Hani.  They also say that the Palestinian Authority is unable to offer any kind of protection to Hani and his family.

“My case is not the only one” says Hani – “Many people have the same pressure.  There are much harassment to all Palestinians – even if you’re not resisting and no settlers have been arrested after they harassed my family.  They have evidence against them but the Israeli government will not do anything.”

Now that he has been released, does Hani think he can ever have a normal life with the death threats hanging over him and a bounty on his head?

“I’m not a terrorist, I didn’t do anything wrong and I think that I deserve to live a normal life, to get an education, to get married and to live like normal people” he replied “but now after all this harassment from the settlers I’m afraid to get married because I will destroy someone else’s life.”  Hani says that if he was to study or work it would be a huge risk to take at the present time.

Even considering the brutal attacks that his family has faced from settlers, does he not think in hindsight that his actions were wrong?  Does he have any regrets?

But does he still believe that this is the most effective way to resist?

“At that time I was 18 years old, it was impossible to take all this darkness from the Israelis except in this way.  Even after 18 years in the prison I see that the settlements are larger, the occupation is stronger and everything is getting worse.  I believe that I did the right thing at the time but now I want to live as a normal person. I believe that I have to stay in one place, and that is the only resistance I can do because I think the fighting time is over.”