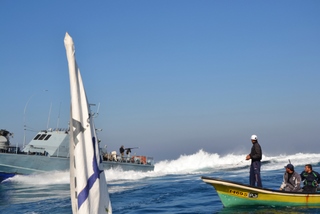 At 10:55 am, an Israeli naval warship attacked the international observers and Palestinian captain of the Civil Peace Service Gaza (CPSGAZA) boat Oliva, injuring its captain in an apparent attempt to capsize it.

“The Israeli navy passed near us and the fishermen, and started to go around us, creating waves,” said Rosa Schiano, one of the international observers. “The fishermen escaped, but we couldn’t because of a problem with our engine. We couldn’t move, and they went around us very quickly. The Israelis saw that we couldn’t move, and that the captain was trying to fix the engine, but they didn’t stop. We told them, ‘Please stop! Please stop!’ But they didn’t.”

When the warship was two meters away from the Oliva, one of the waves it had created nearly capsized the small boat, filling it with water and causing the Palestinian captain to fall out, injuring his left leg.

“Their intentions were to do something very bad,” said international observer Daniela Riva. “Coming so close to us was very dangerous, and they obviously knew that.”

After more than twenty minutes, the warship retreated, and the Oliva was rescued by a small Palestinian fishing boat, or hasaka, which threw it a line and towed it toward the shore.

Photos are available for free use with attribution to Rosa Schiano, Civil Peace Service Gaza (CPSGAZA): http://bit.ly/CPSGAZAphotos. Additional photos and video will be available upon request: email press@cpsgaza.org.

The incident followed similar attacks on the Oliva during previous missions. Video footage is available: http://bit.ly/CPSGAZAvideos.

Restrictions on the fishing zone are of considerable significance to Palestinian livelihood. Initially 20 nautical miles, it is presently often enforced between 1.5 – 2 nautical miles (PCHR: 2010). The marine ‘buffer zone’ restricts Gazan fishermen from accessing 85% of Gaza’s fishing waters agreed to by Oslo.”

During the Oslo Accords, specifically under the Gaza-Jericho Agreement of 1994, representatives of Palestine agreed to 20 nautical miles for fishing access. In 2002 the UN Secretary General Kofi Annan empowered Catherine Bertini to negotiate with Israel on key issues regarding the humanitarian crisis in the Occupied Palestinian Territories and a 12 nautical mile fishing limit was agreed upon. In June 2006, following the capture of the Israeli soldier Gilad Shalit near the crossing of Kerem Abu Salem (Kerem Shalom), the navy imposed a complete sea blockade for several months. When the complete blockade was finally lifted, Palestinian fishermen found that a 6 nautical mile limit was being enforced. When Hamas gained political control of the Gaza Strip, the limit was reduced to 3 nautical miles. During the massive assault on the Strip in 2008-2009, a complete blockade was again declared. After Operation Cast Lead, the Israeli army began imposing a 1.5 – 2 nautical miles (PCHR: 2010).

The fishing community is often similarly targeted as the farmers in the ‘buffer zone’ and the fishing limit is enforced with comparable aggression, with boats shot at or rammed as near as 2nm to the Gazan coast by Israeli gunboats.

The fishermen have been devastated, directly affecting an estimated 65,000 people and reducing the catch by 90%. The coastal areas are now grossly over-fished and 2/3 of fishermen have left the industry since 2000 (PCHR: 2009). Recent statistics of the General Union of Fishing Workers indicate that the direct losses since the second Intifada in September 2000 were estimated at a million dollars and the indirect losses were estimated at 13.25 million dollars during the same period. The 2009 fishing catch amounted to a total of 1,525 metric tones, only 53 percent of the amount during 2008 (2,845 metric tones) and 41 percent of the amount in 1999 (3,650 metric tones), when the fishermen of Gaza could still fish up to ten nautical miles from the coast. Current figures indicate that during 2010 the decline in the fishing catch continues. This has caused an absurd arrangement to become standard practice. The fisherman sail out not to fish, but to buy fish off of Egyptian boats and then sell this fish in Gaza. According to the Fishermen’s Union, a monthly average of 105 tons of fish has been entering Gaza through the tunnels since the beginning of 2010 (PCHR 2009).

Palestinian Centre for Human Rights. “A report on: Israeli Attacks on Palestinian Fishers in the Gaza Strip.” August 2009.