New
Home / Gaza / Farming with a grain of salt

Farming with a grain of salt 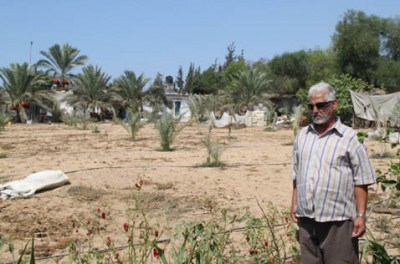 Farming on land that has become almost impossible to farm is now daily reality for 62 year old Naeem El Laham, also known as Abu Mohammed. Together with his wife, 6 sons, 5 daughters and grandchildren he lives on his farm west of Khan Yunis.

“Our farming land stretches out over 2 dunums. My sons help me with the work on the land, just like I helped out my father on the land when I was younger,” says Abu Mohammed.

On his land he has small palm trees, beehives, 6 sheep, some olive trees, and a few vegetable plants. At first glance this looks like any small farm. It is only when you take a closer look at the plants and hear the story of Abu Mohammed, that you realize this farm is under serious threat.

“Until eight years ago we were able to buy water from a source nearby. However, that became too expensive.” Like many other farmers in the Gaza Strip the family is struggling for an affordable water supply, they dug their own water well in 2003.

“About four years after digging the well I noticed an increasing salinity in the water coming from our well” says Mohammed. “The plants deteriorated, as did the harvests. We used to plant vegetables on the land for our own consumption but since they only received salty water, these crops have stopped growing. Since 2003 we were growing lemon trees. When the salinity in the well water rose, the trees turned yellow and produced only small lemons with a salty taste.”

In 2010 Abu Mohammed decided to cut the lemon trees as they were no longer productive. He planted several dozen palm trees instead, as they are apparently more adaptable to the high salinity in the water. “It will take a several years for the trees to have a considerable size and even then, the dates that they produce will not be as profitable as the lemons we used to grow,” sighs Mohammed.

Until two years ago the family drank the water coming from the well, which made them ill. Mohammed explains how “most of our family members had kidney problems and the younger children were taken to hospital many times for kidney stones and vomiting. The doctor in the hospital convinced us to stop drinking water from the well and to buy treated water. This has put another big burden on our already stretched family budget.” Abu Mohammed describes how during Operation Cast Lead white phosphorus landed approximately 1.5 kilometers away from his farm. The smoke and fumes reached his farm and he noticed that his olive trees have stopped growing since.

Abu Mohammed and his family have tried everything they can to continue working the farm, but it seems to become more and more impossible. “We need help to replant our lands”, says Abu Mohammed as he speaks of his wish to continue the family tradition of farming.

Approximately 70,000 people work in the agricultural sector in the Gaza Strip, 25,000 of whom are seasonal workers. The coastal aquifer is their main source of irrigation water for the land. Due to a lack of other resources this aquifer is being over abstracted which 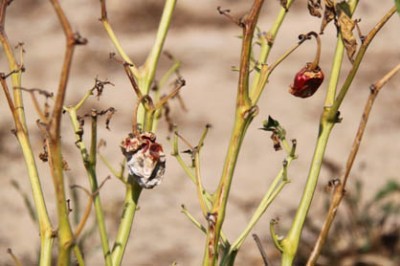 leads to seawater and saline water intrusion. Sewage leaking into the ground water has also increased the already high nitrate levels. Advocacy group EWASH has stated; “In the past, agricultural production has ensured household food security for the Gazan population as well as contributed to economic security. Currently, agriculture in the Gaza Strip is barely viable.”