On the 7th of December, a windy Wednesday morning behind the boys’ school in the Palestinian village of Burin, 15 teenagers, dressed in red uniform, took to the football field under the coach’s whistle. As the team began its warm-up exercises, another youth team arrived from the neighboring village of Huwwara, led by its determined coach. Under the morning sun, the football game began. As fans, coaches and players cheered and yelled from the sidelines, a Burin teenager scored a goal in the first ten seconds, setting the tone for the rest of the match. Two hours and two injuries later, Burin came out on top 4-0 against Huwwara, bringing the season’s record to 8 wins for Burin, 1 win for Huwwara, and 2 draws. As the boys walked away sweaty and satisfied, the school bell rang and children poured outside for recess.

In occupied Palestine, the youth football league becomes, not a routine taken for granted, but a rare blessing. “We love to practice and to play,” said the Burin goalie, “but usually we cannot play on this field, because we are afraid of the settlers or the army. And there is nowhere else to play.” Overlooking the boy’s football field on all hilltops, the illegal Israeli settlements of Yitzhar (birthplace of the extremist “price-tag campaign” of violence), Bracha, and a Bracha outpost loom menacingly. 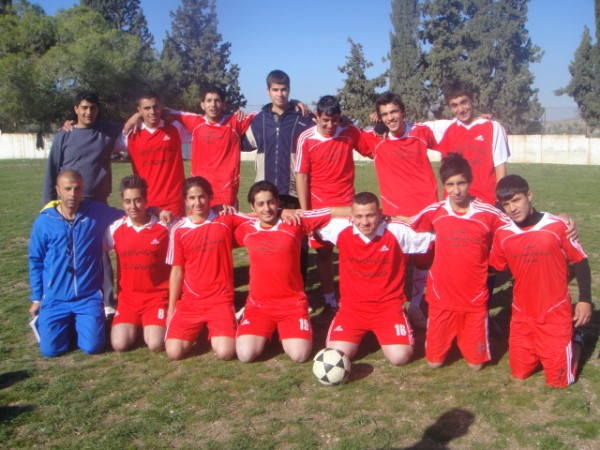 A match to escape Occupation - Click here for more images

“When times are good”, says Ghassan Najjar, co-coach and former Burin football player, “when there are no attacks, we can play. When times are bad, we cannot get together and have games.”

At 21 years old, Najjar’s memories of his own days on the field are still fresh in his mind. “Children here have no outlet. They are lost. They cannot play on the streets because it is too violent, but they do not want to sit at home…my outlet, when I could play, was football.”

Though the last month has spared the village of settler attacks, Israeli soldiers arrive at the school almost on a daily basis.

“The boys’ school,” says Ghassan, “is right by a settler military road that heads up to the settlement. Sometimes the army comes into the principal’s office and says that he cannot let the boys outside of the school to play, for no reason. There is a 24 hour presence of the army outside the school, and the boys are frequently forbidden from leaving.” A football game, like outdoor recess, is a precious window of opportunity for children accustomed to living in fear.

Football- of which the Algerian philosopher Albert Camus, a devoted football goalkeeper before turning to intellectual pursuits, once said “all I know most surely about morality and obligations, I owe to football”- has long cemented Palestinian culture and spirit. Time and again, it appears on the scene as a potent weapon in the resistance struggle, as on October 11, when a football game erupted on the front lines of a hunger strike solidarity protest outside of Ofer Prison in Ramallah.

Once a locus of national consciousness, Palestinian football was deliberately denied international recognition by the Zionist enterprise until the Palestine Football Association was recognized by FIFA in 1998. “Prior to 1948”, says Issam Khalidi in ‘Body and Ideology- Early Athletics in Palestine (1900-1948)’, an excellent study of the politics of sport in Palestine,

There were some 65 athletic clubs in Palestine…these clubs had a tremendous impact on the lives of Palestinian young people, shaping their character and preparing them for social and political involvement…these athletics teams provided a social, national and institutional base for Palestine’s political organization in the first half of the twenty-first century. They developed alongside and in response to Jewish immigration and the Arab-Zionist confrontation. Athletic clubs were important in evoking the Palestinian national consciousness, [and] sustaining connections between villages and cities…the advancement of organized sports in Palestine was closely linked to the development of education. Even though education officials did not emphasize physical education programs in schools, most institutions had competitive football teams.

In 1998, the Italian philosopher Giorgio Agamben, in his book Remnants of Auschwitz, recounts Holocaust survivor Primo Levi’s tale of a football match in Auschwitz concentration camp, held between members of the SS and members of the Sonderkommando, a Jewish unit forced by the Nazis to aid with the disposal of gas chamber victims. The match was improvised at Auschwitz, during a brief respite from the work of death.

“Members of the SS,” remembers Levi, “and the rest of the [Sommerkomando] squad are present at the game; they take sides, bet, applaud, urge the players on as if, rather than at the gates of hell, the game were taking place on the village green.”

Agamben comments that this moment of apparent normalcy is “the true horror of the camp…for we can perhaps think [now] that the massacres are over- even if here or there they are repeated, not so far away from us.  But that match is never over; it continues as if uninterrupted. It is the perfect and eternal cipher of the ‘gray zone’, which knows no time and is in every place.”

Agamben was drawn to the simple normalcy of this football match, chillingly suspended in the furnace of utter moral depravity. The “everydayness,” the banality of Levi’s football match reappears in the timeless normalcy of this Wednesday morning football match in Burin. In the heat of the game, oblivious to its surroundings, football is football. In Burin, however, everyday life is juxtaposed, in the football match, not with, as in Auschwitz, the barbaric evil of the oppressor, but with the resilient spirit of the oppressed. Even in Auschwitz, a mundane game of football, suffused with the smell of burning flesh- a testament to the normalcy of evil; even in Burin¸ a mundane game of football, surrounded by the foreboding faces of illegal, violent settlements- a testament to the strength of a people’s right to exist.

In each case, the ‘match is never over’, the struggle ‘continues as if uninterrupted’, and we are reminded and warned of the constant reality of oppression. In Auschwitz, the oppressors were there on the field, and the football game thereby showed itself as a sadistic, macabre dance of death; in Burin, the oppressors sit silently on the hilltops, and the football game thereby shows itself as a spark of resistance, feeding a flame of survival.

Ben Lorber is a volunteer with International Solidarity Movement.