New
Home / Gaza / Under the flag of UNESCO marched Gaza

Under the flag of UNESCO marched Gaza

We gathered on the road in front of the Agricultural College of Beit Hanoun, one side of the road a functioning school, on the other, only the remains of destroyed school buildings.  For three years the people of Beit Hanoun have gathered here every Tuesday for their protest against the no go zone and the occupation.  Members of the Local Initiative of Beit Hanoun, townspeople, students who had taken the afternoon off of school, and the International Solidarity Movement, all marching under the same flag, the flag of Palestine, red, white, black and green, together.  For three years we have marched together, every Tuesday for three years we have went into the no go zone. 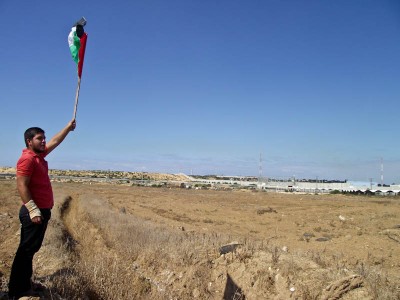 Today was different though.  Today we marched under another flag as well, the flag of UNESCO.  Palestine has been admitted as UNESCO’s newest member.  In honor of all of the countries who voted for Palestine, and in honor of UNESCO, we marched under their flag.  Above all of this, floated a third flag, the black flag of illegality which flies over the Occupation.   This flag is always present; it is just that not everyone sees it.  It was acknowledged in Israel only in 1956, the Supreme Court of Israel referred to it for the first time after the massacre of Kufr Kassem on October 29, 1956.  Forty nine Palestinian citizens of Israel, women, children, men, were murdered by Border Police as they returned home from their fields.  The black flag was always there, it was just that most people refused to see it, many still refuse to see it, yet it is always there.  You only have to open your eyes to see it.

We marched down the road toward the no go zone, toward the zone of death.  We sang and chanted as we marched.  As we got closer we saw that the flag we had planted weeks before was no longer there, it was toppled, it was on the ground.  We went to the flag, Israeli soldiers had used it for target practice, they had shot the base of the flag in two.  We picked up the flag, took it even farther into the no go zone, crossed a ditch, and replanted it.  The olive grove which we had planted last month was still there, green from the recent rain.  Sabur Zaaneen from the Local Initiative of Beit Hanoun spoke, he praised UNESCO and the nations that voted to admit Palestine, he denounced the Balfour Declaration which was made in 1917 in support of the Zionist Movement.  Shots rang out, five shots in total.  This was the Israeli rebuttal to his speech, to our peaceful march against the occupation, the only language which the occupation speaks in Gaza, the language of violence and death.  We walked back to Beit Hanoun, not in defeat, proud, we too had spoken, the steadfastness of our olive trees and marching contrasted with the bullets of the occupation.