Israel drops missile on North Gaza neighborhood, no one cares 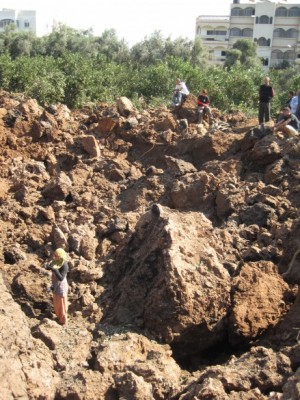 The Israeli Air Force fired a missile into a Beit Hanoun residential neighborhood in north Gaza early Sunday morning. The missile landed in a grove surrounded by homes, creating a crater the size of a tennis court and destroying over forty orange and olive trees. Chunks of shrapnel and oranges lay scattered about the grove

Local children and area residents interviewed appeared to be in shock. Ayman Ismail Hamad explained that “[a]t 3 a.m. we heard a huge boom. It was so scary for the children and women here and they started to shout and cry – such a scary thing for them. When we looked out to see what happened we found everything there totally destroyed … and the windows from the houses in this area – totally nothing. The [Israeli] F-16 didn’t leave anything behind.”

The owner of the farmland, Sufyan Musa Muhammad, reported losing approximately 40 orange and olive trees, not including the uprooted trees at the periphery of the crater, valued at approximately $200 a tree. “It’s not just the price,” he added, gazing sadly at the upturned alien landscape. “It’s that there’s no more fruit.”  According to Muhammad, no journalists had approached him regarding the Israeli missile attack, which went unreported.

Thirteen-year-old Amer Ayman Hamad, whose house is about 50 meters away from the impacted area said, “There was boom … I didn’t scream, I just woke up … it was during the night we didn’t hear any plane except for the sound of the drones … after that I went to the bathroom.”

Israel has not claimed responsibility for the attack which terrorized local residents. No one was injured. Palestinians in the area believe that Israel used an F-16 to bomb the residential neighborhood due to the size of the crater and the thickness of the shrapnel.

When asked if he believed Israel should compensate him for his loss Muhammad replied, “I don’t want money from the Israelis. Whatever they do to us we are steadfast and strong and we won’t leave our land.”