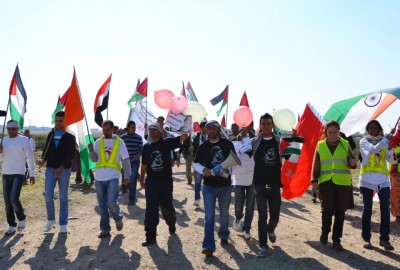 Today, Tuesday, November 29, 2011 is the International Day of Solidarity with the Palestinian People.  This day commemorates the racist and colonialist proposal of the United Nations to partition Palestine in 1947.  All over the world, people stood in solidarity with the Palestinian struggle today.  In Beit Hanoun, today, like every Tuesday for the last three years, the popular struggle raised its voice against the occupation.  Against the no go zone which surrounds Gaza, which makes the refugees of 1948 and 1967 who live in Beit Hanoun refugees once again, the no go zone which throws them off their land and destroys their houses and orchards.  Against the siege on Gaza which is designed to destroy them, their hopes, their dreams, their economy, their future.  Under the unceasing gaze of observation balloons and drones, in the shadow of a giant concrete wall studded with gun towers which seem to come out of a futuristic horror film but which is in fact is the present and is no movie, it is Gaza.  Against the occupation which can only remind the world of George Orwell’s prediction of what the future would look like, “a boot stamping on a human face, forever”.

We gathered in the shadows of the ruins of the Beit Hanoun Agricultural College, not 100 meters away from the graves of the Beit Hanoun Massacre of 2006.  The Beit Hanoun Local Initiative, the International Solidarity Movement, and Palestinians from around Gaza gathered to march into the no go zone.  We were buoyed by the knowledge that around the world today people were raising their voices in support of Palestine, in support of peace, justice and freedom.  The megaphone crackled to life, “We Will Not Go Down” by Michael Heart.  In a sea of flags from around the world, Palestine, Ireland, Italy, India, Malaysia and many others, we began our march towards the no go zone.

We enter the no go zone and begin to release balloons with Palestinian flags attached to them.  The balloons will float over the walls that surround Gaza, they will take our message farther than our megaphone and our voices can.  Perhaps they will be caught in the branches of an orange tree planted by the fathers or grandfathers of the men gathered here, on the land that they were expelled from.  There is no risk that they will be caught in the branches of orange trees before they cross the wall, all of those trees have been bulldozed by Israel when it created the no go zone, the zone of death which surrounds Gaza. In the short story “Men in the Sun” by Ghassan Kanafini some Palestinian laborers die in a water tank while waiting to cross a border.  The driver of the truck is left lamenting, “Why didn’t they say anything” as they died.  We are not silent, even if are voices are lost in the space of the dead zone which Israel created around Gaza, these balloons will carry our message to the outside.  Let no one say that they did not know, that we did not say anything while Gaza is strangled to death.

Sabur Zaaneen from the Local Initiative spoke to the crowd.  He called upon the people of the world “to isolate Israel internationally and to exert pressure in all its forms until the end of the occupation of Palestine.”  Radhika Sainath from the International Solidarity Movement also spoke, “Today the entire free world is against the settlements, the wall and the Israeli occupation.  We will continue our work in Palestine with Palestinian activistsuntil we succeed in bringing freedom and justice to Palestine.”  Their voices were echoed by the chanting of the crowd, against the occupation, voiced demanding peace, justice and freedom, voicing pledgingsteadfastness in the struggle to the end the occupation.