In Photos: Palestinians gather support for #FreedomWaves and ending blockade of Gaza

by Alistair George and Ben Lorber

Canadian and Irish ships sailing with Freedom Waves to Gaza were illegally boarded by the Israeli military in international waters yesterday afternoon.

The Israeli military stated that “Upon arrival of the vessels at the Ashdod port, the activists will be transferred to the custody of the Israel Police and immigration authorities in the Ministry of Interior”.

At present, it has been confirmed that two of the passengers have been released by the Israeli authorities without charge.  The fate of the remaining passengers is unknown. 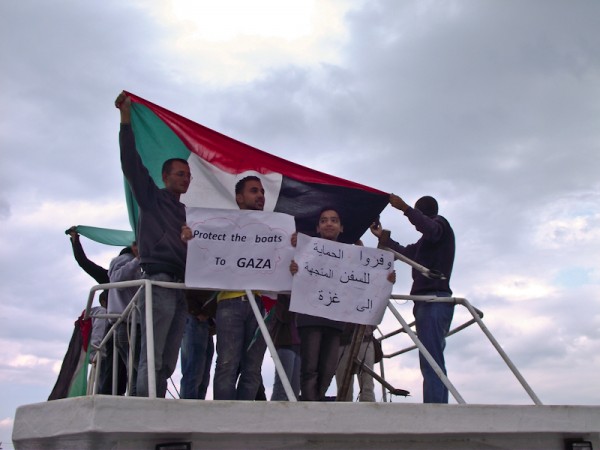 Huwaida Arraf, spokesperson from Freedom Waves to Gaza, said “It’s clear that 27 civilians on two small boats, carrying only medicine, constituted no security threat to the Israeli state, and that the determination to keep them out is only a furtherance of Israel’s policy of collective punishment, a crime against humanity. Despite this Israeli aggression, we will keep coming, wave after wave, by air, sea, and land, to challenge Israel’s illegal policies towards Gaza and all of Palestine. Our movement will not stop or be stopped until Palestine is free.”

The two ships, carrying a total of 27 passengers and $30,000 worth of medicine and supplies, set off from Turkey on November 2.  The Freedom Waves to Gaza initiative is a non-violent, civil society movement to challenge the illegal Israeli blockade of Gaza.

Freedom Waves to Gaza organizers had been unable to communicate with the ships soon after the vessels were approached by Israeli warships earlier yesterday afternoon.

The Canadian boat ‘Tahrir’ (Liberation) confirmed that the Israeli navy had contacted them asking for their destination at around 13:00 (Gaza time) to which Ehab Lotayef, an activist on board the ship, replied “The conscience of humanity”.  When the Israelis again demanded to know the destination of the ship Lotayef replied; “The betterment of mankind”.

When the Israeli navy made contact, both ships were around 51 nautical miles from the coast of Gaza, well into international waters.  ‘

However, the Israeli military reported that the navy has been ordered by IDF Chief of Staff Benny Gantz to board the ships after “attempts to contact them failed.”

Anatolia News Agency, Turkey, has reported that the boats were offered the choice to go to Egypt or return.

A spontaneous gathering took place yesterday in Gaza’s seaport in anticipation of the arrival of the boats turning quickly into a protest, as the news of the assault became known. Protesters are calling for UN sanctions against Israel for its persistent violations of international law.  Protests took place yesterday evening in Ramallah in solidarity with the flotilla, and in Haifa and Gaza the previous days. Rally goers demanded UN accountability for Gaza’s current siege, as Israel continues its tight grip on the suffocating Gaza Strip.

Ben Lorber is a volunteer with International Solidarity Movement and writes for Alternative Information Center. Alistair George is a volunteer for ISM (name changed).