Despite Israel’s blockade on building materials entering the Gaza Strip, local entrepreneurs have come up with a way to turn destruction into reconstruction by recycling rubble into construction material. 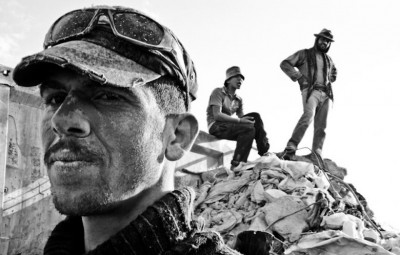 He who builds his house here puts his sweat and blood into it, laying stone after stone. When it becomes rubble, it is devastating and personal for him... (Photo: Ruqaya Izzidien) - Click here for more images

The bedroom of Nasser Abu Said features two-meter holes punched by Israeli rockets and his front door is splattered with deep gashes from the nail-bomb which clawed his garden apart and killed his wife. The staircase is half-collapsed, there is no roof and involuntary windows have cropped up all over the house, each one marking the entry of one of the nine bombs that hit his home, meters away from the eastern border with Israel in the Jahr el Deek neighborhood. This is what a shelled house looks like in Gaza.

The Gaza Strip experiences frequent airstrikes which have targeted every form of infrastructure over the last few months, leaving destroyed farmland, factories and houses in their wake.

Israel forbids Palestinians in Gaza from importing building materials, obstructing their ongoing attempts to repair damage caused during the 2008-2009 war. Add to this continuing destruction caused by regular, if unpredictable, bombings that rain down on Gaza and it becomes seemingly impossible for Palestinians to reconstruct buildings destroyed by Israel since the siege came into effect in 2007.

However, a stroll through central Gaza City makes it clear that Palestinians living in the coastal enclave have resorted to ingenious and defiant methods in order to keep Gaza’s homes and businesses running. It is known as ‘rubble recycling.’

The area east of Gaza City is littered with stone-crushing factories that are identifiable from the huge clouds of dust that hang over them. These factories buy rubble from bombed out buildings, crush it down into pebbles and refashion them into new bricks, allowing Gaza to be rebuilt, in spite of the ban on construction materials.

Younis Aboul Foud was one of the first entrepreneurs to found a stone-crushing plant, or kassarat in Gaza. He began crushing rubble 25 years ago, “We even used to import stone and crush it into all sorts of bricks, but now importing such materials is banned by Israel. Today, recycling rubble into building blocks is our only option; there is no alternative and no other construction materials are available to us.

Three weeks into November, the Israeli authorities allowed a rare shipment of construction materials into Gaza, but the recipients were hand-picked private organizations or businesses. Although Israel permitted an average of 800 trucks into Gaza over the last three months, this is around 16 percent of the construction material that crossed into Gaza between 2005-2007, before ‘Operation Cast Lead’ and the need to reconstruct the 18,000 homes that were damaged or destroyed in the offensive.

The few building materials that enter Gaza are only permitted for use by recognized international agencies, while regular citizens have no access to the 800 trucks that enter and no opportunity to reconstruct damage caused by repeated bombings. Even civilians who qualify for assistance from the United Nations Relief and Works Agency (UNRWA), say they are told that their home is not ‘damaged enough’ or wait months or years for their houses to be rebuilt.

23-year-old Khalil Elzaneen began rebuilding his home in the north of the Gaza Strip one year ago using bricks he bought from the kassarat stone-crushing plants. “There are no stones in the country to construct bricks, so they have to be made out of rubble. The borders were completely closed and until today there aren’t building materials in Gaza. Even the cement had to come in through tunnels.”

Elzaneen and his family could no longer live in their old home, which suffered day-to-day wear and tear, exacerbated by frequent bombings that weaken the structure of many of Gaza’s older buildings. “You can’t stop people from acquiring the materials they need to live, however hard you might try.”

Israel maintains that the blockade of the Gaza Strip is necessary for state security and that construction materials are prohibited because militants could use the cement and stones to build hideouts.

Khalil Elzaneen disputes this, “Every restriction they impose on us is to do with ‘terrorists.’ I really don’t think that this is what the construction materials are used for; Israel is simply punishing an entire population. Look around you, you can see that we don’t use the bricks to build hideouts for terrorists; we use them for constructing homes and civilian buildings.”

Kassarat factories have created an exclusive and highly-coveted amount of building materials in Gaza. As with any other market, these fall into the hands of the most affluent amongst the community. Along with factory-owners, businesspeople and NGO-workers, political parties and armed groups are able to raise funds when a building they own is destroyed. As a result, the ban on construction materials – and the blockade in general – affects most the poorest residents of Gaza, who cannot pay the escalated price of up to US$10 per cement block.

Some see other advantages to rubble recycling that have a deeper message than simply making a living, “Israel doesn’t want us to rebuild, that is why it is important that we do,” explained Aboul Foud. He sees his means of earning a living as an act of defiance against Israel, using their airstrikes to bring new life to bombed bricks. “In spite of their attacks and the blockade, we will keep recycling rubble and making life from nothing, making life from rubble.”

Khalil Elzaneen explained, “Even if I am told not to rebuild, I will still continue to do whatever it takes to survive and that, to me, is a form of resistance.”

But recycling rubble is far from idyllic. Fahd Daghmoush runs a rubble-crushing plant east of Gaza, which employs young men to break down the larger pieces of rubble so that they are digestible for his machinery. His employees work surrounded by powdered rubble and dust. “You can see that it is very dangerous to be crushing these stones,” he explained, “it is going to affect our health in the future and maybe even shorten our lives.”

Daghmoush entered into the business of recycling rubble out of compulsion, “If I could do absolutely any other job, I would; I don’t want a job that damages my health. I used to be a construction worker, but these days there is no work and I’m too old for that anyway. Hopefully by manufacturing bricks from rubble, I am creating jobs for the younger people who struggle
as I do.”

There is also a depressive cycle associated with refashioning building materials from rubble, the bricks are simply in rotation, like a currency. In order to have new bricks for your own house you have to wait for someone’s home to be bombed.

Fahd Daghmoush explained, “He who builds his house here puts his sweat and blood into it, laying stone after stone. When it becomes rubble, it is devastating and personal for him. People here put everything they own into building their homes. But life has to continue and we have to bounce back.”

But using the resources available to you is not optional in Gaza, Younis Aboul Foul explains. “We use all of our resourcefulness against this siege to challenge those responsible. Gaza is resilient – every way which we pick ourselves up is miraculous. Everyone has a right to live, and that’s all we want to do, whatever it takes,” he says.

The majority of recycled rubble is used to create the standard half-meter blocks that overwhelm the Gaza Strip, particularly in the refugee camps that are identifiable by their gray, piled cube signature. But a small amount of granite is reused for decoration and calcium carbonate is powdered down to provide Gaza with talcum powder, make-up and whitewash.

Palestinians in Gaza have defied the ban on construction materials since the siege began; turning what was once a blooming trade into a necessary business required in order to rebuild the territory. It is a bittersweet industry, but in besieged Gaza, nothing can afford to go to waste.