New
Home / Reports / Freedom Riders: “I felt like I was witnessing history”

Freedom Riders: “I felt like I was witnessing history”

Earlier today, 7 Palestinian activists were arrested as part of the Freedom Rides attempt to board segregated buses going from the West Bank into occupied East Jerusalem. 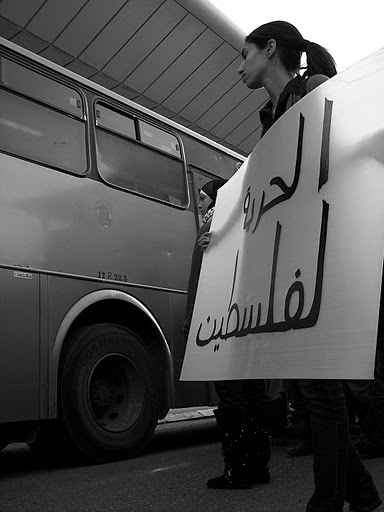 Palestinians, Israelis and ISM activists waited at a bus stop outside the illegal settlement of Psagot, while four settler buses pulled up and drove away, refusing to open their doors. Israeli police and occupation army surrounded the activists, while a group of settlers massed to observe. Finally, a bus took the activists aboard, and the bus made its way to Hizmeh checkpoint, trailed by army jeeps and police vehicles.

At Hizmeh checkpoint, occupation forces stopped the bus, refusing to allow it to pass. During this time, border police attempted to enter the back of the bus and violently drag one Palestinian off the bus. When both attempts failed, border police commandeered the bus, and forced it to park by the side of the checkpoint.

After about half an hour, border police entered the bus, and forcibly dragged the six Palestinian Freedom

Riders off of the bus. “When they pulled them out of the bus, it was not gentle,” said ISM activist Crystal. “A girl next to me was almost crying.” Activist and lawyer Huwaida Arraf was rendered unconscious by the forcible removal.

The Palestinian activists were arrested and taken to Atarot prison, on the grounds that they had entered Jerusalem illegally.

Later that night, ISM activists held a demonstration outside of Atarot, demanding that occupation forces release the prisoners.

“I felt like I was witnessing history,” said ISM activist Wajed.

Ben Lorber is an activist with International Solidarity Movement and writer with Alternative Information Center.