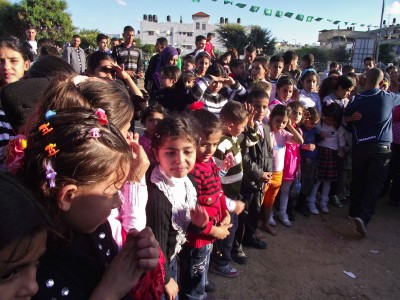 In the afternoon, we went to a special Eid children’s fair at a park in Beit Hanoun, in the north of the Gaza Strip.  Fifty percent of the population in Gaza is under the age of 18, and as we arrived, that statistic became quite clear. There were kids everywhere.  Playing, dancing, singing –riding horses — all in their brand new Eid clothes.  Poofy synthetic dahlia barrettes were all the the rage among the girls. Volunteers from the Beit Hanoun Local Initiative, which works with children traumatized by Israeli violence (among other things) were singing and clapping as dozens of kids shrieked with pleasure as we arrived.

Then there was a sort of homemade karaoke where Arabic songs were played over speakers and kids would sing along.  Everyone got a prize.

This report was excerpted from a longer post on Notes from Behind the Blockade.