On November first, activists from popular committees and activist youth movements through out the West Bank met with Egyptian ambassador , his Excellency Yasser Othman, in Ramallah to express their congratulations and support for the people’s revolution of Egypt and to formally present a petition to open the Rafah crossing unconditionally and permanently.

This petition was originally issued by Gaza-based civil society sectors including academics, students, workers, and youth. It was immediately supported publically by Egyptian revolutionaries and grass-roots organizations as well as renowned International human rights defenders such as Desmond Tutu and Richard Falk. 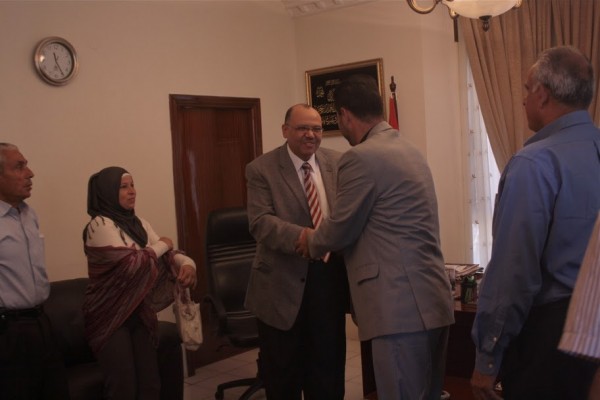 The delegation expressed it’s commitment to the struggle against the deadly and criminal Israeli imposed siege on Gaza as an essential part of the struggle to end Israel’s Occupation and Apartheid.

The delegates welcomed the opening of the door of hope for a new Arab world grounded in solidarity and freedom by the peoples revolution. “Our hope from the new Egypt is to ensure that Gaza’s only exit to the outside world that is not under the control of Israeli soldiers will be open completely, permanently and unconditionally.

As we are sure your Excellency would agree, freedom of movement is a basic human right and should not be made subservient to political considerations, especially given that Rafah is the only lifeline the people of Gaza have to the outside world.”

The delegates pointed out that the current crossing process often results in significant, and in some cases inhumane, suffering on the part of the ordinary residents of Gaza. For example, Gazans often have to register and wait for weeks for “their turn” to leave the territory. The nature of the process often requires people to spend over 10 hours waiting to cross, including the time it takes to gather in a collection area in Gaza and be transported by buses to the crossing.

They also ask that Palestinians with foreign passports  (who do not carry Palestinian ID cards) should be allowed to visit their families in Gaza.

The delegates gladly acknowledge recent improvements to the situation in the crossing: the fact that the quota of people allowed to cross daily has been raised to 500-800 and the fact that some people who were banned from entering Egypt by the previous regime are now being allowed to cross.

These improvements are welcomed but are not enough to eliminate the suffering caused by the closure of the crossing.

They asked that the last remnants of the old era’s policy, the daily quota and the list of banned individuals, be eliminated as we the people of Palestine and Egypt work together for a future of Justice and dignity.

The ambassador responded that great changes and improvements have taken place since the revolution and that improvements would continue to happen in the coming days. He promised to deliver the petition to the responsible officials in Egypt. He responded positively to invitations of the activists to visit locations throughout the West Bank engaged in popular resistance against the Apartheid wall and settlements.