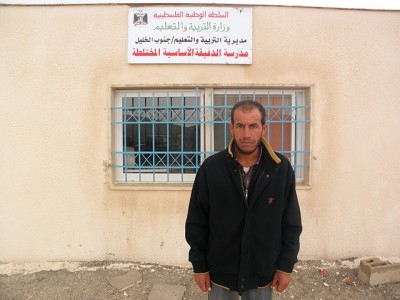 The entire Bedouin village of Dkaika encounters demolitions, and all the villagers face expulsion. Every single construction of Dkaika has a demolition order totally over 75 demolition orders including a mosque, a school, a graveyard, water cisterns, housing tents, and folds for sheep.

This Thursday, on the 24th  of November, the Israeli Supreme court will decide if it will accept the interim injunction submitted by villagers in collaboration with Rabbis for Human Rights.

The Israeli Civil Administration plans to expel the Bedouins in Dkaika to a village 6 kilometers north of Dkeika called Hameeda. The Civil Adminstration reasons that in Hameeda members from the same Bedouin tribe called Ka’bne reside there and thus the expulsion is justified. Rabbis for Human Rights consider the planned expulsion to be a violation of international law. Yet the issue is complicated since none of the Bedouins of Dkaika have land in that village, and the tribe system of the Bedouins makes it impossible for the Bedouins to move to other Bedouins’ land.

In reaction to the demolitions, the head of Dkaika community, Mukhtar Yussif Nadjada said, “If they come and demolish our houses we will start rebuilding the same day. We have lived on this land before the creation of Israel and we will die on this land.”

The ICA (Israeli Civil Administration) usually puts pressure and building restrictions on villages in area C by using area zone planning. They draw a circle fitting the needs of the Occupation and name it the buildup area. This causes a lot of problems for villagers because it restricts their possibilities of building on their land, and normally it supports the expansion of settlements and is of no infrastructural use for Palestinians. In the case of Dkaika, ICA is not even willing to create an area zone planning. ICA claims that the Bedouin village has no self sustainability, and for this reasons they will expel all citizens of Dkaika to Hameeda.

Mukhtar Yussif Nadjada, the head of Dkaika, said, “The planning of the Occupation ONLY suits the building of the soldiers and settlers who expand. We live near the separation wall, and that’s why they want to expel us.”