New
Home / Features / Al Baqa’a: The struggle of a family in the shadow of illegal annexation

Al Baqa’a: The struggle of a family in the shadow of illegal annexation

“The Israelis hope that that the young people leave, the old people die, and then they can confiscate the land and the houses” says Sami, an activist working in Al Baqa’a, a windswept valley situated a few kilometers east of Hebron. 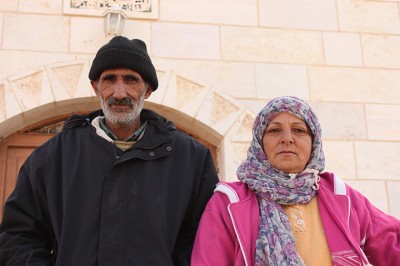 Atta and Rodni Jaber at their house in Al-Baqa'a, near Hebron

The Jaber family’s experiences of living in Al Baqa’a are similar to many other Palestinians in the area, in that their ordinary family faces extraordinary pressure on a daily basis from the Israeli military and nearby settlers.

Rodni Jaber is the mother of three daughters and a son.  Dressed in a bright pink jumper and a floral headscarf, she is cheerfully voluble and keen to tell her family’s story.

“We have had our house demolished twice, this our third house on the land.  We lived in a tent for six months and after that we got a court decision to live in this area within 150sqm, so we started to build this home.”

Rodni and Atta Jaber work as farmers growing grapes, raspberries and tomatoes in the milder months and radishes and turnips in the winter.  Neat lines of cauliflower grow next to their stone house situated halfway up the hillside facing west towards Al Bwayre and the illegal Israeli settlements and outposts of Al Bwayre mountain.

The family owns 31 dunums of land (1 dunum = 1000 msq).  Despite having papers dating from the era of the Ottoman Empire proving that the family owns the land, their house still has a demolition order in place.

“We went to the court, and we have a postponement by the Israeli military to destroy this house”  says Rodni.  “We are not here legally – by Israeli law – but they let us live here for the moment.”

Around 900 Palestinians live in Al Baqa’a valley.  Many of the houses in the area are subject to demolition orders as the Israeli authorities and the settlers attempt to make life impossible for the Palestinians in the area to expand Israeli settlements.  Local residents and activists claim to have in their possession a map on which red lines outline areas in Al Bwayre and Al Baqa’a valley that have been designated by Israeli engineers as places for the construction of 500 new housing units for Israeli settlers.  Much of the land is currently inhabited by Palestinians and will need to be cleared to make way for the proposed development.

In addition to experiencing house demolitions and harassment from the military, the Jaber family has been subjected to repeated attacks by Israeli settlers from nearby Al Bwayre and Qiryat Arba settlements and various outposts. 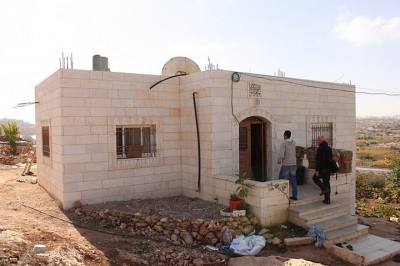 The family’s house and land was attacked by settlers around a month ago.  The Israeli military arrived in jeeps but declined to intervene as the settlers attempted to set fire to the house.  Rodni Jaber explains:

The soldiers were there just to protect the settlers.  The settlers told us to leave the house and said ‘this is our land’ .  They even began to complain to the soldiers asking them to kick us out of the house saying that ‘the land is for Abraham and not for them’, putting pressure on the soldiers…They [the settlers] tried to burn the house and I began to push them to stop, I even called the Israeli police to come and see what the settlers were doing.  All the family fled as we were afraid of being burned in the house.

They failed to set fire to the house.  This was just one incident in a long line of attacks on the family over the years; “I lost a baby [because I was attacked by settlers]. I was 4 months pregnant at that time and they attacked me and I lost it.  I have been attacked many times by the settlers and I have been in hospital many times.

Nine or ten years ago an ‘operation’ happened on the highway here by the Palestinian resistance against the settlers.  After that, the settlers gathered in Qiryat Arba and came here.  They broke the door, entered the house and burned it…I left without shoes and wearing my pajamas.  The settlers kicked my family out for three days….The soldiers then occupied the house for 40 days.  We got a high court decision to return – when we came back to the house everything was broken.    At that time settlers also went to my brother’s family [who lives near the house] and they shot him in the stomach – he survived but he has a plastic stomach now.

Al Baqa’a residents live under full Israeli civil and military control in Area C, so how do they protect themselves when the soldiers stand-by and facilitate settler attacks on the family?

Rodni stated that  “The chief of police has been to the area and said ‘If something happens just call me’.  We got a paper from the DCO (District Coordination Offices) saying that the Israeli soldiers have to protect this house.  We got this when we were attacked in 2001.  But they don’t do anything – it’s just paper…Most of the Palestinian people in this area are from my family so we try to protect each other.  If they attack a house they try to go to the house to protect it.”

A cousin of the family was attacked last week as he rode a donkey in the valley; settlers hit him on the head with metal piping.  He was hospitalized and his wounds were stitched up, luckily he was not badly injured.

How does the family cope with the psychological pressures of the constant threat of attack?  Rodni smiled and stated, ” I am very strong…and if something happens I think ‘Al Hamdillilah’ (By the blessings of God).

If the family’s experiences are often terrifying and brutal, they are also occasionally absurd.  In 1998 Rodni’s son Raja’ was born.  A few days after his birth, settlers attacked the house; one settler made a complaint to the police that someone called ‘Raja’ had put a knife to his chest, threatening to kill him.

“After that [several days later] the soldiers came to arrest my son – who was 40 days old” said Rodni.  “They heard about my son ‘Raja’ and they came and asked ‘where is Raja’.  I showed him my son who was 40 days old, I showed them his birth certificate because they didn’t believe he was Raja’.”  But the incident did not stop there as Rodni said, ”

They said that Raja’ should come to the court – at the age of 50 days I had to take him to court.  They said ‘where is the defendant Raja’ I showed them my son… the judge ruled that when he reaches 16 years old he will have to come to back to court!”

Surely when the case comes to court and it becomes apparent that Raja could not even sit up or support the weight of his own head at that time of the incident, let alone threaten to harm anyone, the situation will go beyond parody.  Rodni laughs and agrees it will be extremely embarrassing for the Israelis but the ruling still stands; Raja is 12 years old now and in four years time he will have to go to court and explain his role in the incident.

As Rodni talks, her husband Atta returns from work, wearing a woolen hat against the Autumn chill.  He talks eloquently about Palestinian history and recounts his memories of Al Baqa’a Valley during the Six Day War in 1967.

“I was five years old when they occupied the West Bank, I still remember that day.  The Israelis bombed the people and the Jordanian army here and they killed maybe 150 people in that time.  Everybody had put white keffiyehs out as white flags to show that this is a peaceful area.” 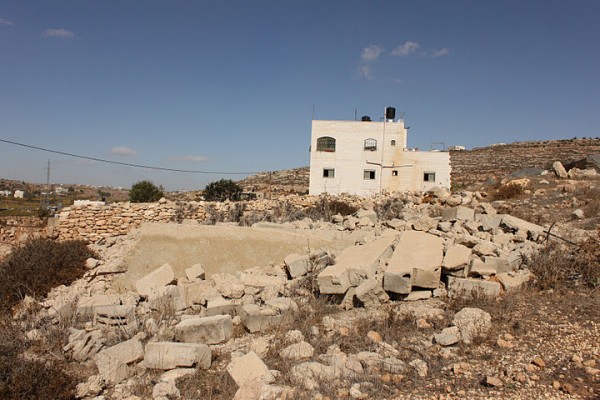 As well as talking about the area’s history and the threat from settlers and the Israeli military, Atta described the mundane challenges of daily life in Al Baqa’a valley.

” We have a lot of problems in this area; there are no schools to send our children, we don’t have any clinics or hospitals.  We don’t have water – the settlers have water 24 hours a day.  We connected pipes to the settlement after we had submitted a lot of applications with the Israeli administration and water companies.  In 1998 we applied to the company to have water but Israel prevented this.  Under the Geneva Conventions it says that you are responsible for those that you occupy, but they want to transfer us from this area even though we have been the owners of the land for hundreds of years.”

Atta and Rodni refuse to be daunted by the problems they face.  When asked about what the future holds for their family, Atta evades directly answering the question and replied in broader terms.

“It is not just my future, it is about all Palestinians’ future.  Their tragedy and suffering becomes greater everyday.”