As B’TSelem documents shooting of man, employee is arrested

A 55 year old Palestinian man was taken to hospital from Nabi Saleh due to an injury from a rubber coated steel bullet.  After two hours of demonstrating the Israeli Occupation Forces invaded Nabi Saleh and arrested one Palestinian, 36 year old Bilal Tamimi, who works for B’Tselem, an Israeli human rights organization. 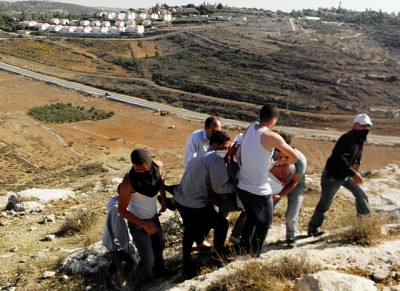 The demonstration in Nabi Saleh began with the commemoration of Yassir Arafats death seven years ago. A big poster with Arafat was carried in the front of the demonstration and the chanting honored the former leader of Palestine. When the demonstrators reached the outskirts of the village they were met by a truck shooting skunk water while  the Israeli Occupation forces shot gas directly at the demonstrators.

Afterwards the Occupation Forces invaded Nabi Saleh and arrested Bilal Tamimi, a 55 old Palestinian who works for B’Tselem. They arrested him while he was documenting the crimes of the Occupation Forces in his village. An Israeli Btselem worker who also participated in the demonstration said that B’Tselem assumed that Bilal was taken to the nearby military camp in the illegal Halamish (Neve Zuf) settlement, located opposite of Nabi Saleh. He was released later in the evening.

The Occupation Forces occupied two houses in Nabi Saleh and placed the skunk water truck and three jeeps at the crossroad in the village, leaving the demonstrators hiding for a couple of hours in order to avoid arrest and getting their houses sprayed with the skunk water. Several times the military tried making surprise attacks to arrest demonstrators but they did not succeed. The demonstration ended at sunset, greeting the military jeeps with a rain of stones when they finally left the village.