Early Thursday morning, a Palestinian woman in Beit Furik was picking olives when a settler began to chase her and set loose wild hogs to chase after her, causing her to fall and suffer broken bones in both her legs. 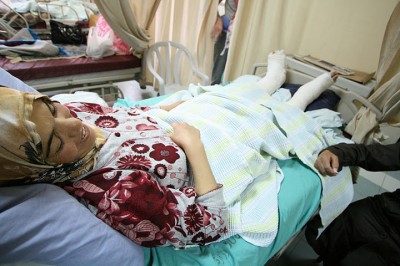 Muhaya Khatatba was in her olive groves with her two sons, aged 14 and 17 years old, when a settler descended from above the hill and began to chase her.

“I was with my kids picking olives, when a settler saw us, and took advantage of the fact that we were all alone,” said Khatatba.

Then the settler released wild boars after her. She beckoned to her boys to run ahead of her, and as she ran, she tripped on some rocks and broke her leg. She struggled to begin running again, using one leg, and fell again, breaking the other leg. Unable to stand, her boys ran back to pick her up and ran with her to meet other villagers. She broke one leg in three places, and the other leg at the ankle.

Khatatba says that when she saw the settlers she was very frightened because of the violent attacks on residents of Beit Furik in the past few years.

Khatatba is only thirty-five years old. Her husband cannot join them in the harvest because he is obliged to a full time job. She has never gone into her trees without permission from the Israeli authorities, and Thursday was one of the four days she was permitted.

Now her permission time has run out despite the many olive trees that are left.

Beit Furik is very close to the Itamar settlement, considered illegal by international law. Itamar has a wide history of brutal attacks and harassment of the native Palestinian population around them. The settlement was formed in 1984 and has grown from 300 residents to over 1000.

In the past, illegal, Zionist settlers have reportedly damaged Palestinian property, obstructed access to their farm land, stolen olives, attacked, and even shot at local Palestinians. In 2004 illegal settlers murdered a Palestinian taxi driver who was shot and killed. In 2007 three Palestinians were killed in their home, including a 10-week old infant.

In both cases, the settlers who committed the crimes did not serve time in prison.