Welcome to the settler party

As I pass, my Palestinian scarf is hidden in my bag – I do not want to get any spit on me tonight. Around the tomb of Shimon HaTzadik, the festival is going on. The settlers have built a stage, erected a huge party tent and assembled a long line of portable toilets. Danceable klezmer music is booming from the loudspeakers and the Israeli police are present with horses and cordons. Children are playing around amidst guns and dancing men with beards and luminous bracelets.

One wouldn’t expect a Jewish festival to take place in the middle of the Palestinian neighborhood of Sheikh Jarrah. But it’s not a coincidence – it’s a statement. Otherwise I would gladly have jumped into the crowd and joined  the vibrant mass.

A while back, someone sprayed “A.S.A.B.” on the wall to the al-Kurd family house in Sheikh Jarrah. All Settlers Are Bastards. There are people in the garden when I enter it, and I am desperately trying to figure out whether they are friends of the family or rabid festival-goers that are here to backslap the Israeli settlers. 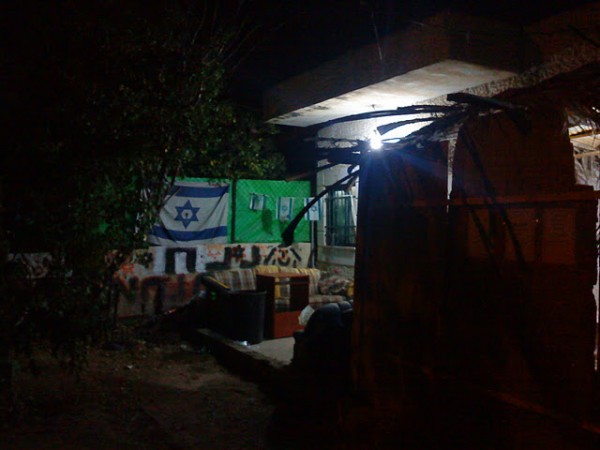 I’m relieved when I catch a glimpse of Alex and Ellen in the tent outside the house. Since March this year, activists have been keeping watch outside the al-Kurd house, and tonight it is our turn. But there are more activists here tonight because the settlers’ festival is perceived as a threat. I greet an activist from EAPPI and some Israeli activists who say that they usually play drums on demos. “Good thing they didn’t bring their drums here”, I managed to think through the noise from the settler celebrations.

If one could break down the Israeli occupation of Palestine to one single conflict, it would be Sheikh Jarrah. Since 2008, many Palestinians here have been evicted from their homes and extremist settlers have instead moved in and barricaded themselves behind barbed wire and surveillance cameras. These settlers are neither interested in UN resolutions nor the Oslo Agreement. They are politically and religiously fanatical nationalists who believe that they have been given this land by God.

Nabil al-Kurd offers a new round of tea in the tent where we sit, and he pours a heaped teaspoon of sugar in my cup before I can protest. Since 2009 the al-Kurd family unwillingly lives side by side with a bunch of settlers occupying half of the family’s house. The settlers have marked territory using large Israeli flags on the terrace. The Palestinian flag, however, is conspicuously absent here in occupied East Jerusalem since it is banned by law.

The settlers are macho guys in their 20s whose main task seems to be turning the life of al-Kurd family into hell. They stay up all night, booze, provoke their dog, flash themselves and fuss a lot. Last time I kept watch in this tent, they tried to throw water on us seven or eight times through their window. They spat in my face, called me a “Palestine bitch” and threw stones in our direction. Activists have sometimes called the police there when the settlers go too far, but the police seldom intervene.

The legal process of the occupied houses in Sheikh Jarrah is still ongoing. “But this is not about law, this is about politics”, Nabil al-Kurd says. He is backed by the Civic Coalition for Defending Palestinian Rights in Jerusalem, which concludes: “The existence and continuous expansion of Jewish settlements throughout the occupied Palestinian territory, in particular East Jerusalem, is fast foreclosing any future possibility of a viable Palestinian State with East Jerusalem as its capital”. I tell Nabil al-Kurd that he needs a good lawyer. “I have three lawyers,” he says, smiling. “And it is Norway and Sweden that pay for them.” 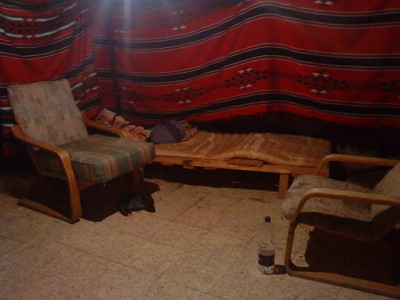 The tent outside al-Kurds house where international observers keep watch

All through the evening, people walk in and out of the settlers’ part of the house. It is mainly young men with orthodox Jewish outfits who pass, but for the first time I also see women and children visiting the settlers. They chat a bit with the settlers and then the settlers’ dog scare the children so they get terrified and rush away.

Towards midnight, the festival begins to calm down and several of the activists leave Sheikh Jarrah too. Nabil al-Kurd goes to bed and I sit alone in the tent with Alex and Ellen. Some Palestinian teenagers from the neighborhood come by and try to teach us some curses in Arabic.

One of the settlers comes out and screams something, and the teenagers, who also speak Hebrew, scream back. “They said they’d call the police if we don’t shut up”, they translate. One of them, Joseph, tells how the Israeli police tend to harass Palestinians in Jerusalem, and how the policemen every day stop him in the street and ask him: “Hey, Joseph, will you show us your ID?”. People with “non-Arabic” looks can freely pass by.

Now a policeman with a luminous bracelet between his teeth enters the garden. He looks around and peeks into the house where the settlers live. “It’s gonna be cold tonight,” he says to us in the tent. “Yes,” we answer, interrogatively looking at each other. The policeman leaves again.

At 3 am the area is quiet and dark and even the settlers seem to have gone to bed. We are thankful for an early night without confrontation. Together we walk through Sheikh Jarrah and now I dare to wear my Palestinian scarf. The police are still there and someone yells “Go to hell!” after us.