New
Home / Journals / There is no east: Olive harvest in Gaza

There is no east: Olive harvest in Gaza

Gaza doesn’t have very much farmland left.  The expanding no go zone imposed by Israeli bullets and bulldozers constantly erode the amount of land left for Palestinians to farm in Gaza.  Mohamed Ashure Shimbari lives on the edge of the no-go zone.  If you look east from his land you see the no go zone, what Israel euphemistically refers to as “the buffer zone.”  Little grows there.  Israeli bulldozers regularly come to kill anything which has managed to find a life there.  You can see the destroyed well which once provided water for the orchards that used to cover the no-go zone.  Now, there is no water, and no life, only a zone of death. Israel claims that the buffer zone is “only” 300 meters wide, but Mohamed’s land is about 800 meters from the border, and still he is afraid. The Israelis often shoot into this area, especially at night. 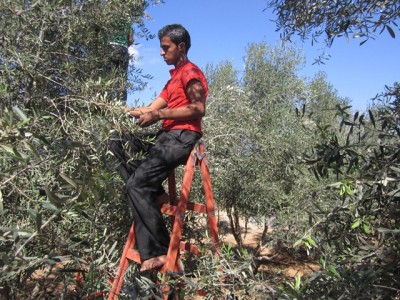 The olive harvest has begun in Gaza.  The Beit Hanoun Local Initiative and the International Solidarity Movement went to Mohamed’s land to help him harvest his olives today.  The trees are pregnant with fruit, green and black olives line the branches.  Mohamed’s family depends on these olives to live. We join Mohamed and his sons in the morning, the weather is beautiful and the trees are picturesque.  We spread plastic under the trees and begin to pick.  Thankfully, it is quiet.  The Israeli’s are not shooting today.  We work quickly, stripping the branches of olives, climbing up on ladders or into the branches of the trees to get at the higher olives.  Unreachable olives are smacked with a stick to knock them off the tree.  Any olives that fail to fall onto the plastic sheeting are carefully picked up; these olives are too precious to waste.  The olives are transferred into bushel sacks.  Tomorrow, they will be processed, either cured for eating or crushed for oil. As the sun climbs higher into the sky and the work becomes hotter we break for tea.  We decide to walk over and visit Mohamed’s neighbors, a Bedouin family.  We meet their young son Abed who has just come home from school.  He walks five kilometers to school every morning, and he walks home at night, he does this with his sister and his brother.  Abed is 10 years old.  He is a shy kid; he wants to be a dentist when he grows up.  He doesn’t seem to think that peace will ever come to his family, that they will ever live a life without worrying about the shooting from the Israeli’s at night.  He lives a life of three directions, north, south, and west. There is no east really, you can’t walk that way, you would be killed.  His family is forced to truck water from Beit Hanoun, the well that they used to depend on for water has been destroyed by the Israeli’s.  His mother comes out; she tells us that she prays for peace, for a life with water and without fear of the bullets. 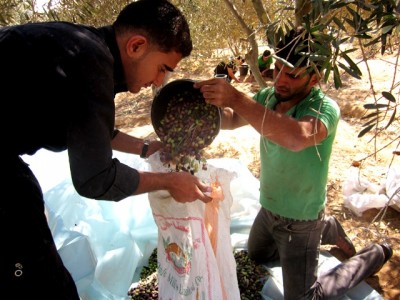 We return to work the olives.  Tree by tree, up and down the rows, we move gathering olives.  Mohamed tells us about his life.  When the Israeli’s invade Gaza his home is one of the first places they came to.  Not because they are afraid that he has guns, but because they want to use his house.  He and his family are locked in one room while the soldiers use his house as a base for their attacks on Beit Hanoun.  During Cast Lead his family was locked in the room for 23 days while the IDF carried out their slaughter on Gaza. Throughout the world, the olive is a symbol of peace, but in Palestine it is also a symbol of people’s ties to the land.  The no-go zone east of Beit Hanoun is constantly expanding. Every year or two the Israeli bulldozers come and destroy even more land.  Mohamed’s house is now on the edge of the no-go zone.  Maybe next year his house will be destroyed, the olive trees which we are picking from will be uprooted. Yet maybe his house will be spared, after all, if it is destroyed where will the soldiers sleep when they invade Gaza?