New
Home / Features / The Olive and the F-16: Autumn in Gaza

The Olive and the F-16: Autumn in Gaza 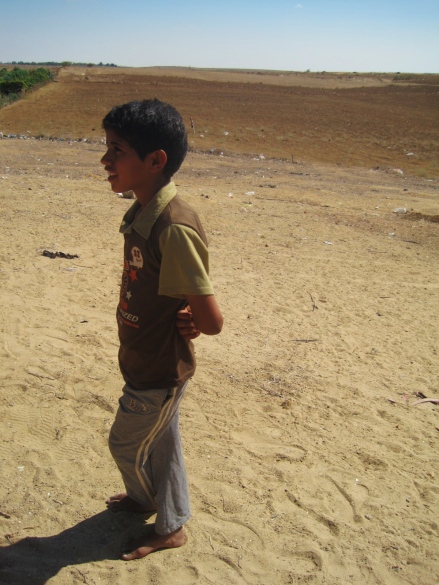 Together with the Beit Hanoun Local Initiative, International Solidarity Movement (ISM) volunteers picked olives with families near the buffer zone in the village of Burej and in two different locations in Beit Hanoun this week.

“We’re here to harvest olives and be with the land because this is our land and we don’t want to abandon it,” said 27-year-old Randa Hilou a local student to came to pick in solidarity with the farmers in Beit Hanoun.

On Wednesday, dozens of local children joined in the picking. I asked the children why they had come. “I’m here to pick olives,” declared 9-year-old Mahmoud, taking a break from dumping olives into a blue plastic crate.  “We love olives,” added other children, who gathered around.

At one point in the day, the sound of Israeli F-16s could be heard overhead. “I went picking with my mother and father,” added Bursa, also 9-years-old. “I am not afraid.”

Later in the week, ISM volunteers picked closer the Erez crossing in an area that used to be full of olive, orange and grapefruit groves.

“Before, people came from all over Gaza to pick fruit in this area,” explained Saber Zaaneen, the 33-year-old coordinator of the Beit Hanoun Local Initiative explained to me on Thursday as we sat on a plastic tarp picking plucking purple olives of supple branches.

“Why did Israel destroy the groves?” he asked.  “To destroy the economy of Gaza. Why the resistance? Because of the occupation.”

I had asked Saber on earlier occasion why the olive trees in Gaza were so skinny.  In the West Bank, they’re very big, I explained.  He informed me that these trees were new, and that Israel had bulldozed the beautiful old olive trees of Gaza in 2001 and 2002. “Israel does not have a culture of peace,” explained Saber. “They have all of this advanced technology, why do they kill children like this?”

Nine year old Yara, who wants to be a doctor when she grows up expressed a similar sentiment on Wednesday, “They [the Israelis] are always occupying us. They threaten children.”

Radhika S. is an activist with International Solidarity Movement (name has been changed).