The lonely olive tree of Bil’in

Near the concrete wall which separates Bil’in from Modiin Illit colony, occupied by ultra-Orthodox Jews, there is an olive tree.  It is impossible to know how it survived the construction of the wall and how it continues to resist to the lack of a few cares that the specie demands – a lack caused by the Israeli barbed wire fence that prevents the access of the residents to the point where it is, in the buffer zone.  This survivor came to the attention of the villagers since some time ago. Today they finally managed to breach the fence and to go to the lonely olive tree for harvest. 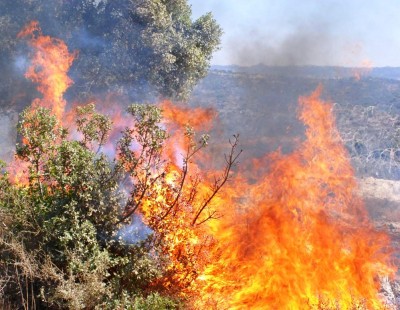 The tear gas grenades fired by Israeli soldiers, who lurked on the other side of the wall, attempted to prevent the harvest, a time of year that mobilizes the entire population of Palestine. One of the canisters fell on dried plants, and the heat of the metal caused a fire which the residents were able to control. Spread by the strong wind the gases reached even the activists more distant from the site – people from the village, from Israel and from around the world –causing suffocation, burning eyes and skin.

October 14th’s demonstration was dedicated to Palestinian political prisoners on hunger strike and to the beginning of the olive harvest.