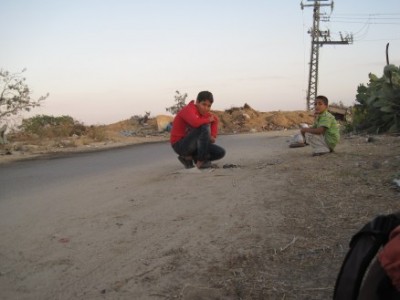 After a lovely day of drinking excessive amounts of tea with a few families in South Gaza (Faraheen and Khuza’a, to be exact), an Italian colleague, Silvia, who used to live in Khuza’a, suggested walking down the road towards the local school.  It was late afternoon, about 4:30 p.m. and dozens of children played in the area.  We walked past  slices of a giant concrete wall placed in the middle of the road.  The slivers reminded me of Israel’s Apartheid Wall in the West Bank — 25 feet of reinforced concrete.   The local villagers had apparently retrieved these sections from a former settlement and placed them there so that children could play outside while being (somewhat) protected from Israeli army gunfire.

Silvia pointed to a school farther down the road.  “That’s where the children go to school,” she said.  The sun was beginning to set and the area was quite beautiful if one didn’t look too hard at the Israeli military towers in the distance.  I took some pictures, and even asked Silvia to take a photo of me.  Kids played nearby and a donkey cart passed us.  I photographed a house that looked like it had been bombed, but the bougainvillea had grown back in vibrant fuchsia.  Two boys playing with a piece of plastic ran towards us from farther up the road and begged me to take a photo.  I snapped a sloppy photo, and they eagerly checked their digital images on my camera.  One in a green sweater thought it was terribly funny that the  boy’s in a red hoodie’s head was missing in my photo.

They ran up ahead, and we walked for about 15 seconds when I heard a strange whiz, a whistle, eerily close to my ear. I paused, a bullet?  Red hoodie and two younger boys up ahead hit the floor as I momentarily pondered the strange sound.

The kids turned around and yelled at us to stupid foreigners to get down.  We bent down and started to walk away — fast — and they yelled at us to get completely on the ground.  The Israeli army left us no time to be scared. No gunshots over our heads.  No warnings.  A second bullet whizzed  past the three kids, and then us.  The Israelis were shooting at us from the towers 500 meters ahead. This time, we were on the ground. I continued to look at these 9-year-olds or 10-year-olds or whatever they were for cues–walking towards their school under Israeli fire was clearly routine for them and they knew what they were doing.  We waited on the ground for several minutes.  As I still had my camera in hand, I snapped a quick photo of them from the ground.

A minute or two later a father and his toddler, also further up on the road came towards us and offered a ride on the back of his motorized cart. We jumped in and he “sped” back to behind the wall.  Anyway, I got back to my apartment about an hour later, just in time for my Arabic class.  Even though I had actually studied this time, I couldn’t concentrate.  Why was the Israeli army shooting at our heads?

And I realized this is what Palestinian first, second, third, fourth graders experience daily in Gaza.