New
Home / Reports / The anthem of Nabi Saleh: “Release our prisoners or arrest us all”

The anthem of Nabi Saleh: “Release our prisoners or arrest us all”

The Friday demonstration in Nabi Saleh celebrated the release of three long term prisoners but protested the continued imprisonment of the remaining 5,000. 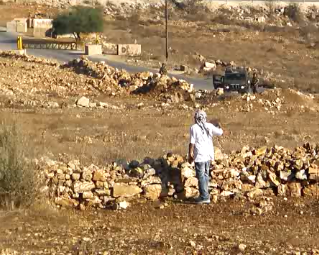 A demonstrator stands his ground as the Israeli military fires tear gas canisters.

The demonstration started out by visiting the house of prisoner Said Tamimi.  Tamimi has been in prison since 1993, but his fellow prisoners who were arrested with him, Nizar Samir Tamimi and Ahmad Tamimi, will be released on Tuesday.

The demonstration continued towards the entrance of the village lead by the mother of Said Tamimi, chanting and singing slogans to honor all the political prisoners and protesting the illegal Israeli occupation. Before reaching the entrance of the village, the Israeli Occupation forces shot tear gas and sprayed foul-smelling “skunk water” at the demonstrators. After 2 hours the demonstration went back to the center of Nabi Saleh, and it was announced that all demonstrators were invited on Tuesday to a party for the released prisoners with the words:

The release of Palestinian prisoners are a Palestine wedding. Therefore we will celebrate it with an appropriate party.

The demonstration then continued until dawn. The IOF shot a massive amount of tear gas directly at demonstrators and an uncountable amount of rubber coated steel bullets, injuring several of the participants.The Israeli Occupation Forces attempted four times to enter the village but they were repelled. The soldiers also attempted to occupy a house near the entrance of the village but the family living in the house withstood. Instead the Israeli soldiers occupied the front garden of the house causing damage by puncturing a water tank with a tear gas canister, and a car window was broken.

The prisoners from Nabi Saleh who are going to be released as a part of the prisoners swap between Hamas and Israel all faced life time sentences. Ahlam Tamimi was sentenced 16 life terms accused of driving a man to Jerusalem who blew up a restaurant in 2001. She will be sent to exile in Jordan. The two other prisoners getting released are Ahmad Tamimi and Nizar Samir Tamimi. Along with Said Tamimi, who will remain in prison, they were accused of killing a settler and have all been in prison since 1993.

Since Nabi Saleh’s regular Friday demonstration began in 2009 against the land grab by illegal Israeli settlers, 10 % of the 500 citizens in the village have been arrested. Two members of the local Popular Committee are still in prison.

Naji Tamimi was arrested on the 5th of March in 2011. He is sentenced to one year in prison. Bassem Tamimi who was arrested the 24th of March 2011 has still not received a sentence. The main evidence brought against both men is the testimony from Islam Dar Ayyoub a 14 year old boy. It has been proven that during the interrogation of him, Israeli Youth Law was violated several times.