New
Home / Hebron / Teachers in Hebron give lessons at Checkpoint 56

Teachers in Hebron give lessons at Checkpoint 56

This morning the pupils and teachers from Qutuba School protested against the treatment of teachers at checkpoint 56. When, for the second day running, the teachers were not allowed to use the checkpoint gate that they usually use, they refused to pass through. In response at 8 AM the school closed, and the pupils came out to take their lessons outside of the checkpoint.

Addressing the children at the beginning of a lesson one teacher said, “Until the teachers are allowed to pass around the checkpoint we will have our lessons here.”

At the same time thousands of Palestinians gathered near the municipality of Hebron in a solidarity demonstration with the hunger striking prisoners. Here there were speeches from the head of the prisoners club, Amjad Najjar and the governor of Hebron, Kamil Hamid. In the square where the demonstration took place there have been tents forming a solidatarity camp for the prisoners for the last one and a half weeks. The demonstration ended peacefully at 10am. 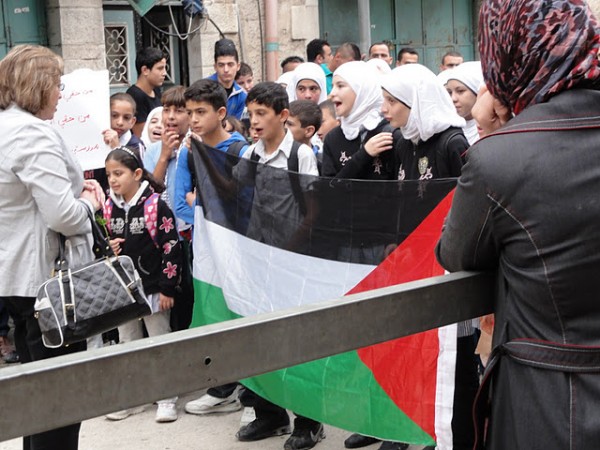 At the same time, away from the demonstration, in the old city, there were reports that some settlers had attacked Palestinians. The settlers reportedly threw stones at the Palestinians, and after a short while the Israeli Occupation Forces arrived. When the Palestinians did not disperse immediately, the soldiers shot tear gas canisters directly into the crowd and made 4 arrests. One of the detained men is Fatel Dendis, 20 who has learning difficulties. After half an hour of unrest the Palestinian Police arrived and dispersed the Palestinian protesters.

In an act of collective punishment the soldiers demanded that all traders in the Old City to close their shops immediately, and offered no indication of when they would be permitted to re-open.