New
Home / In the Media / Struggling for water in Gaza

Struggling for water in Gaza

The Beach camp “Al-shate” is located to the west of Gaza City. Small houses are crowded together with an unbearable smell springing from the wastewater running through the alleys. As volunteers in Youth for the Right of Water and Sanitation project (YRWS) we occasionally visit homes there randomly for our case study on water problems. Residents suffer enormously from serious water problems caused by the Israeli occupation which for years has undertaken exploiting and withdrawing all our pure water resources; groundwater, the Jordan River, the Gaza valley and Lake Tiberius. Thus, all aquifers start to run out and the problem of salty water is increasingly appearing in most houses in Gaza. 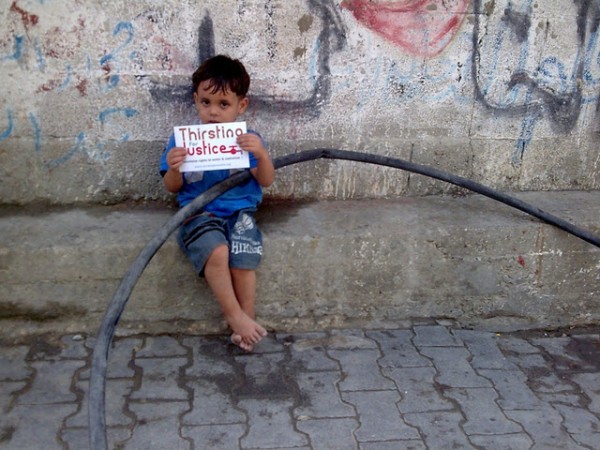 We visited the home of Haider Saed Abu-Jazya, a 51 year old carpenter and a father of 14 children whose family has a long miserable history with water. “We have been suffering from water shortage and unfair distribution for 10 years. It’s only available for two days a week beginning at midnight only to run out again in the morning. Along with the problem of polluted insufficient supply another problem has emerged, salty water” said Haider who looks older than his age.

The tone of Haider’s voice tells us he is extremely worried about his family’s life. He is likely to pass on the misery he inherited from his refugee parents to his children. “Can you drink a cup of tea melted with three spoons of salt? Absolutely you cannot” he stresses. He describes how salty and polluted water negatively affects his family. For this, he is obliged to buy a 500-liter gallon supply of water which costs 15 NIS 4 US dollars a day. Sometimes he borrows from a neighbor or friend to pay for it, ‏ other times his friends have no money to offer.

Not only is pure water used for drinking but also for ordinary daily use. Haider has a big family, yet he earns a low income to cover the simplest and most important needs of life like water ‏which must be affordable to all people as a matter of human rights.

“A house without water as quiet as a desert”, he concludes.

Once, he ran out of water for two weeks in a row, so his wife couldn’t do the house chores like cooking, washing and laundering. Thus, they had to throw their dirty clothes away, which were not laundered for days and could not be used again.

How can a human being survive in such conditions?! How can not one be infected by diseases of salty water?

“The low quality of water causes allergies and red pimples arising on my children’s skin” his wife whispers.

“All dwellers of the neighborhood gathered and headed to the municipality to complain about the water problems we all face, there were promises made but never fulfilled” he said.

Haider speaks on behalf of the Palestinian nation, hoping this voice will be heard all over the planet.

To those who read this article, imagine that you cannot get a drop of pure water while your baby is strongly crying because his milk is his only food.

Palestine suffers from severe lack of water and Gaza’s water in particular is going to run out by 2020. As long as the world commits absolute silence, Gaza will turn into a wasteland. Gaza needs your help, don’t hesitate to help our people.