Settlers desperately try to fit the role by stealing olives

On Tuesday, illegal settlers from the Susiya settlement harvested the olive trees belonging to the Abu Sabha family from Susiya and Yatta, South Hebron Hills. 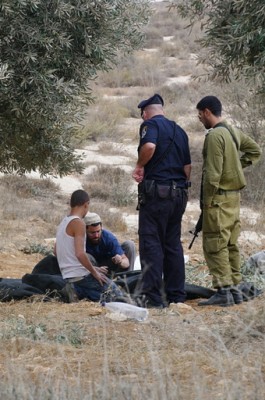 Around 12 o’ clock a villager from the area spotted two settlers picking olives from the land of Abu Sabha. He alerted the police, the District Coordination Office (DCO) and international observers who then were the first to arrive at the scene. When the settlers were asked to stop stealing the olives they claimed ownership of the land and warned the observers from setting foot on the land.

Israeli military arrived and they reluctantly called the police and the DCO for the second time, who then arrived and engaged in a lengthy discussion with the settlers. After a couple of hours the picked olives were confiscated and the land declared a closed military area.

The DCO said that the olives would stay in their custody until the Israeli court makes a decision on who is the rightful owner of the land. Except from the few olive trees next to Road 60, all of the Abu Sabha land in Susiya is occupied by the settlers who built a settlement there in 1982 and have continued to expand since then. The fear expressed by the villagers, is of course that when the police and army leave the land, the settlers will immediately return and continue their violation against the Palestinians and their land.

Last year when the Abu Sabha family had picked their olive trees, the settlers stole their harvest. When the family complained to the Israeli police, the police closed the case citing that the settlers had already turned the olives into oil.

Aida Gerard is an activist with International Solidarity Movement (name has been changed).