On Tuesday October 11, about 200-300 Palestinian and solidarity activists held a non violent demonstration near the Israeli Ofer prison, near Ramallah, in support of the demands of prisoners on hunger strike since September 27. The action began at 12:00 PM, as those in solidarity joined the parents and relatives of prisoners. The demonstrators held pictures of the captives and chanted slogans for those inside the prison to hear.

After few minutes the Israeli Army and the border police started to throw tear gas canisters directly at the protesters, in an act forbidden by international law. The canisters came from the soldier’s arms and from a new machine which, on the top of the jeeps, could fire from 5 to 15 teargas canisters at the same time. Whenever the demonstrators tried to come back to Ofer’s gate, the militar forces started to shoot at them with canisters and rubber coated steel bullets.

The result was a great number of people injured in their legs, arms, and the belly, besides a lot of cases of asphyxia due to gas inhalation. The new sound arm, referred to as “The Scream,” was also used.

Dozen of white balloons were released by Palestinians. The protest went on until 4 pm.

Ofer prison is just one of the 22 detention centres where Palestinians political prisoners are held under Israeli custody, both in Occupied Palestine and within the 1948 borders.  All detention centres are extremely overcrowded, according to reports by non governmental organizations. In Ofer, Israel also holds child prisoners. 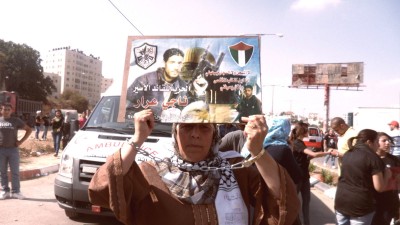 Palestinian prisoners started the hunger strike in protest against confinement and other forms of torture and abuse, increased by they  Zionist government throughout the years, especially since June 2011.

The strike, started by detainees of PFLP (Popular Front for Liberation of Palestine) yet has now spread to thousands of adherents, including the relatives of prisoners and those in solidarity. In Ramallah alone dozens of internationals and Palestinians continue their own hunger strikes in solidarity.

Israel has affirmed it won’t attend to the detainees’ demands,  while the administration of one prison has made some concessions, but not related to the captives’ priorities.

Demonstrations have been held in a lot of cities through West Bank, Gaza and Israel proper, and permanent tents in support of the hunger strike were installed in the center of Palestinian districts. The prisoner’s health has been deteriorated day by day, and the prison authorities have just increased the repression and the punishment. Palestinians are calling for international support to raise awareness and to show solidarity.

According to the Palestinian Ministry of Detainees & Ex-Detainees Affairs, there are 6,000 Palestinian political prisoners in 22 different detention centres inside Israel proper. This number, however, is contested by Addameer Prisoner Support and Human Rights Association, which informs, in its website, that there are actually 8,383 imprisoned.

Among these there are 285 minors and 28 women, as well as 270 Palestinians under “administrative detention” (without trial and without convictions, for unespecified periods of time). From the detainees,143 have spent more than 20 years in prison, and 20 are at the moment in solitary confinement.