Nablus sisters fall victim to yet another hit and run crime

Sajah, 19, and Ahlam Bilal, 18, from Kufr Qaddoum were injured on Tuesday October 4th by Israeli settler, Eliyaho Miller, on the main road in Huwara. The two women were walking to Ibn Sina College of Nursing where they are studying when the settler crashed his vehicle into the women. After he hit them both and Sajah was thrown 10 meters from the accident, he attempted to flee the scene by foot. Miller was stopped by a Palestinian taxi driver until the Israeli police came to make a report.

The hit and run attack occurred at 7:50am as the two sisters were walking to campus. As Sajah and Ahlam were about to cross the road, they both saw the settler’s car speed up when they stepped into the street. He made contact with Sajah first in her left shoulder which flung her body into the air until she fell 10 meters from the car. She now has suffered three broken bones in her upper left arm as well as both hips broken. Her sister Ahlam has a bruised, swollen eye and an injured right leg. Sajah was rushed to Rafidya hospital to be treated for the injuries. 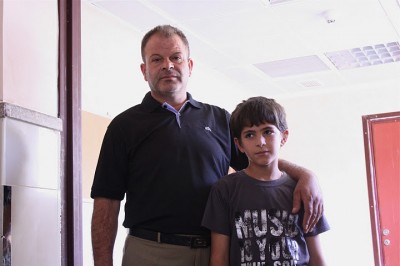 The father and brother of the hit and run victims, Saja and Ahlam Bilal

Under Israeli law, the Israeli police are under obligation to call an Israeli ambulance when there are injuries of any sort of accident involving settlers. In the hesitancy from Israeli police to call an ambulance, Palestinians living in Huwara took it upon themselves to have an ambulance arrive in order to bring Sajah and Ahlam to the Nablus hospital. Both of the women said Israeli police and military personnel eventually arrived at the scene, but the Israeli army said it had no information on the accident and police reported that they were checking into details of the event.

This particular settler incident comes on the tails of increased harassment and violence towards Palestinians by Israelis. An official report quoted by Quds Press earlier this week stated that there were 33 cases of deliberate vehicular attacks by Israeli settlers against Palestinian civilians in the West Bank since the start of 2011. Farid Jaber, 8, was murdered after being hit by an Israeli settler’s car in Hebron on September 26th. Nasser Abu al-Kabbash, 20, was involved in a similar hit and run accident with an Israeli settler in Beit Dajan on October 10th.

All this is in addition to “pricetag” violence from Israeli settlers, the uprooting and burning of olive trees in Palestinian cities around occupied West Bank as olive harvest begins, and increased legal persecution of Palestinians for trivial reasons. Sajah received surgery on October 7th for her 3 broken bones in the left shoulder which went successfully according to her doctor in Nablus. The doctors at Rafidya are waiting to see how well her pelvis bones begin to heal before undergoing any correctional surgery.