The people in the Bedouin community, Mihtawish, in Khan el Ahmar area outside Jerusalem today faced a house demolition. Three family houses were demolished, which hosted in total 39 people. 30 of them are children. One family lived in their house year round and two were soon to come for the winter. The families will now stay temporary  in tents provided by the UN, but they will have to move to another area, while the demolition order is still valid.

The families received the first demolition order 10 days ago and were then told to demolish their own houses. When this did not happened a final demolition order was sent three days ago. Around 10 AM today 15 military vehicles arrived and the army demolished the three houses. Two of the sons of the families spotted the jeeps and called the head of the community, Abu Rayyed, who contacted the UN and the president of the whole area. 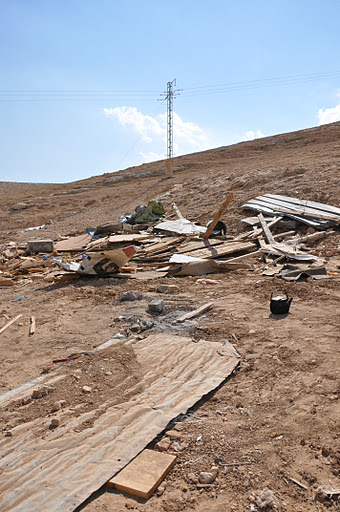 Of course the families did not demolish their homes themselves. Not only did they loose their homes, but they will also be held responsible to pay for the rent of the bulldozer that demolished the houses. Only one woman and one child were present when the demolition happened. All the men stayed away from the location in order not to be held financially responsible.

The area is considered Area C, which means no Palestinians are allowed to build anything, yet Bedouins, known for their nomadic lifestyles, have been caged between areas. They are also prohibited from rebuilding old encampments or houses.

Abu Rayyed recently brought new wooden panels and corrugated iron for his house, but all building materials were confiscated by the Israeli army. The area is also a nature protectorate, but the hills are all sand and stones and the only green to be seen is inside the illegal Israeli settlements that are surrounding the Bedouin communities.

The families in the Bedouin community in Khan el Ahmar are originally from southern Palestine, but were displaced in the 50’s.

Now the families are soon to face a second replacement. This was the first demolition in the whole area of Khan el Ahmar, but not the last one. The villagers have received a verbal demolition order for the whole area, and the whole Bedouin community will be displaced. There are speculations that this will happen In January, but yet none knows for sure when and how it will happen, or where they will go, as expressed by a woman who lost her home today.

“They want us to go away, but where should we go? There is nowhere for us to move. But they want us all to disappear. All of us,” she said.

Samira is an activist with International Solidarity Movement (name has been changed).