New
Home / Reports / In recovery: Hit and run victim’s will is stronger than ever

In recovery: Hit and run victim’s will is stronger than ever

Sajah Bilal Abd el Raouf Jum’a, 19, who was seriously injured in a hit and run attack by an Israeli settler is still in need of treatment for her injuries. After ten days in the hospital she is now back in her home in Kufr Qaddoum. She will need to stay two more weeks in bed before she is able to walk. This Sunday her 20 days off from university will expire, and she will continue her studies from her home.

Her father will take her to school once a week in a wheelchair. Sajah’s sister, Ahlam, 18, who was also injured in the accident, stayed one night in the hospital following the incident and is now doing well.

The incident took place the morning of October 4th when the sisters were on their way to university. Eliyaho Miller, a settler from one of the nearby illegal settlements, was driving his car at  a very high speed on the main road in Huwarra when he hit the girls. He tried to escape from the scene but was stopped by locals from the village of Huwarra until israeli police and military reached the location. 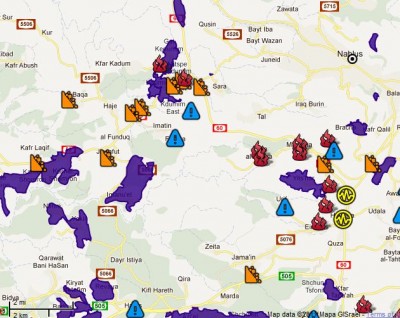 Locals called an ambulance that helped the girls to the Rafidya Hospital in Nablus where they received treatment. Sajah got her shoulder treated with laser technology, which showed up to be problematic.

“The doctors are really bad. I am worried for her future. I will try take her to Jerusalem to find her a better doctor.” says the girls’ father, Bilal Jum’a. Access to medical treatment is most times obstructed by Israeli military between villages, especially since Kufr Qaddoum’s main road is blocked by the Israeli military, forcing villagers to take a longer route that weaves around illegal settlements. Because of the implications of the illegal Israeli occupation of the West Bank, and its monopoly of borders, checkpoints, and entry points, medical equipment and skills are limited.

Attaining access to Jerusalem for medical care is also a tedious process, with Palestinians often waiting for permission by military run District Coordination Offices that determine access to such services.

The family still has to pay more than 1,000 dollars for treatment in the hospital, which they have not paid because they want to hold the driver responsible for medical costs as legal costs mount.

Israeli authorities have labeled the event an “accident” without trying the case and that they will  not charge the driver. This comes following similar hit and run attack the previous day, which injured 20 year old Nasser Abu Al-Kabbash.  And just over a week before these two incidents in the Nablus region, an 8 year old boy was hit by an illegal settler in Al Buqaa. As the Israeli-plated car fled the scene near, Taleb Jaber was left to bleed.

The Jum’a family will keep defending the case of Sajah until they find justice in the mangled laws of Israeli occupation. Sajah confidently stated that she will win the case.

“He admitted that he hit me. It is clear. There were a lot of witnesses.”