New
Home / Features / Fishing in Gaza – no day at the beach

Fishing in Gaza – no day at the beach

I saw an Israeli naval warship for the first time yesterday, a concrete monster the color of ash, guzzling up the Mediterranean and spurting it out in its wake.

I rose early to go out with the Oliva, a small white boat used by Civil Peace Service (CPS) Gaza to monitor the Israeli navy’s conduct vis-à-vis Palestinian fisherman.

My colleague Joe and I walked across Gaza’s sandy shore, past a dozen wooden boats painted in bright shades of pink, blue, green and yellow and then jumped onto the Oliva.  CPS’s white and blue flag billowed as Captain Salah started the boat’s engine and we pulled out of the harbor. Burgundy carpets with geometric designs lay across the boat’s floor.   Three orange life jackets sat within an arm’s reach.

“Oliva to base, we are now leaving the port,” Joe radioed. 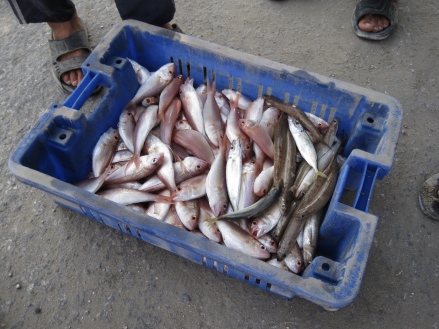 Because of weather conditions, we didn’t get started until about 8:20 a.m.  Joe showed me how to work the radio and we were off.  Dozens of small wooden boats – hasakas as they call them here – docked in Gaza’s peaceful harbor floated above the water, and if I didn’t know better, I may have felt like I was on a Middle Eastern pleasure cruise.

“So this may sound obvious, but if the Israelis water cannon you, don’t just stand there,” Joe informed me. “Duck,” he said in a matter of fact tone.  “Oh, and go to the front of the boat, they generally target the engine.”

We sped towards the infamous 3 nautical mile line – another unilaterally-imposed “no go” zone imposed by Israel in June 2007 – cutting through the waves. Under the Oslo Accords, specifically under the Gaza-Jericho Agreement of 1994, Palestinians are permitted to fish 20 nautical miles off the coast of Gaza.  Israel reduced this amount in 2002 to 12 nautical miles, and began enforcing a 6 nautical mile limit after Shalit’s capture in 2006.

“How are you feeling?” Joe asked me. At least one other international human rights observer had gotten sea sick on her first journey, and had asked if I would like to take something in advance of the journey for sea sickness.

“Oh I’m totally fine,” I responded.  This was nothing. I mean the Mediterranean — it wasn’t even an ocean, how bad could it be? I declined the pills. And besides, I was tough.  I sat back on the seats and chatted with Saleh for a bit in Arabic. He had 25 years of experience on the sea and told me the name of his village in what is now Israel from where his family was pushed out of in 1948.

At about 2 nautical miles I checked our position. We could see the Israeli naval ship moving towards five hasakas, headed our way. We continued forward, and then stopped our engine as one of them pulled up beside us.

“The Israelis shot live fire at us and we came back,” one of the men on the blue, yellow and white boat said.  All of the hasakas came towards us, as fast as their small engines would be allow.

We all floated around for a while, until the navy moved away and the fisherman head back out.  The Oliva straddled the 3 mile line, engines off, monitoring the situation.  The fishermen explained what I had already read, that there were no fish to catch within 3 miles from the shore. The fish were 5, 6, 7 miles out.  And so, the fishermen went out every day, sometimes fishing within 3 miles, sometimes going out further, in an attempt to ply their trade.

We watched as the Israeli navy played the game of cat and mouse with the working fisherman of Gaza, shooting at them when they came out, then moving south to shoot at another set of fisherman, then coming back towards us, and back again. Some of these fishermen had been detained by the Israeli navy in the past, taken to Ashod and then released, their boats damaged or confiscated.

I jotted down some notes, and, suddenly felt a wave a nausea. Taking notes was making me sick. I lay down.  Joe periodically radioed the base to report our coordinates.  At times, we could hear the crackle of the radio as the Israelis talked amongst themselves, sometimes in Hebrew, sometimes in English. I tried to recall the Hebrew I had learned years ago, but that too, made me sick.

“The navy is back,” Saleh reported. “Look they are very close to the fisherman.” I sat up and tried to take a few photos and some video footage, inhaling the engine’s fumes as the Oliva rocked in the sea.  I lay back down.  I was the world’s worst human rights observer at sea.

Saleh continued to explain the situation in Arabic, but my brain stopped working. I crawled up, leaned over the side of the boat and gagged a few times. And then, well, my breakfast came up.  All of it. And dinner from the night before as well.

As my head dangled over the side of the boat, I wondered if the Israeli navy was watching us with their binoculars. Didn’t they have anything better to do then harass these poor fisherman? I mean really, the navy is supposed to be one of the most prestigious units for Israelis, and here they were spending all day, every day chasing after skinny fishermen riding in tiny pastel-colored wooden boats.  Gilad Shalit was free, so really, why the 3 mile limit? Were they worried that Palestinians were going to fling sardines at them using 18h century technology?

After about ten minutes I came back up.  Captain Saleh had started the boat and he let me drive it for a few minutes, since apparently that cures sea sickness. It did. Around 11 a.m. the fishermen head back and so did we.

Back on shore, we saw the group that had initially reported the gunfire and they showed us their meager catch of silvery fish – selling for about 20 shekels ($4) a kilo. They would be back out again tomorrow, Israeli gunfire and all.