Festival of Victory and Triumph: Families in Gaza welcome return of prisoners

Thousands of Palestinians gathered in Gaza City’s Qatiba Square yesterday morning, swelling to over 200,000 as news arrived that the prisoners had safely crossed the border from Egypt into Rafah.  ISM volunteers waited for hours with local families eager to catch a glimpse of the former prisoners as they exited their buses.

“This is the best day of my life because today, good defeated evil,” said 45-year-old Saleem Abu Sa’ada.  “For us, we want all the prisoners to be free,” he added.  Qatiba Sqaure, a large sandy plaza, took on a festive atmosphere as women, men and children waved Palestinian flags, as well as flags of the various political parties. On the street, vendors sold juice, tea, coffee, bread as well as Palestinian flags. 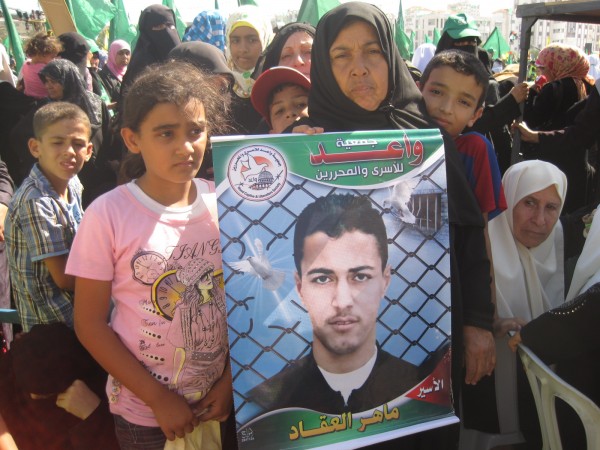 Mother of Maher El 'Aqaad - For more images of the festival of victory, click here

One 55-year-old women from Khan Yunis who described herself as the mother of Maher El ‘Aqaad, said “I am so happy. These are all my sons, and I hope all are released.” El ‘Aqaad was captured by Israel in 2005 when he was 17 and is still serving an 8 year sentence.

Throughout the day music played in Qatiba Square. On stage, people danced and sang.  Meanwhile, those on hunger strike in solidarity with the prisoners—including 3 ISM volunteers—suspended their two week strike today after Israel agreed to end solitary confinement.

“All of the prisoners are our children and all of us are so happy for our children who have been released,” said 60-year-old Saleem Ibrahim Faris, a retired teacher. “I hope unity returns to the people, that we unite our state and that we work together to achieve the state of Palestine,” he added.

Radhika S. is an activist with International Solidarity Movement.