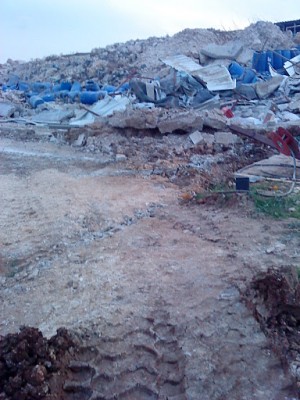 When Mohammad woke up on Tuesday, he still did not know about the Israeli forces or the bulldozers that were on their way to uproot his trees and demolish his entire farm. But before the day was over, all of his property was erased and one could hardly guess that there had ever been a building there.

“I’m very sad because of the farm”, Mohammad said.

The soldiers claimed that the buildings were illegal, referring to the Israeli Civil Administration. “This is the land from my grandfather, and I have no other land,” Mohammad says.

Mohammad lives in Anata in the West Bank with his wife and twelve children. The village is trapped by the Separation Wall around Jerusalem to the west, and Area C and the planned expansion of the settlement Ma’ale Adumim to the east. The village has no possibility to expand without building permits from the Israeli Civil Administration. The process is expensive, and for Palestinians, the application is rejected in 95% of the cases. From 2000 to 20007 91 almost 5,000 demolition orders against Palestinian buildings were issued.

In a separate incident, a four year old Palestinian child from Anata was shot in the neck around noon. Asil Arara’s wounds have left her in  serious condition and may cause paralysis. The illegal Israeli settlement of Anatot, also home to settlers who recently violently attacked Israeli peace activists, is home to a military training camp, where it is said the shot that struck Arara was fired.