New
Home / Reports / After decade of demolitions, Susiya shepherd will continue to herd

After decade of demolitions, Susiya shepherd will continue to herd

On 10 October an Israeli army jeep filled with Israeli soldiers and a representative from the District Coordination Office (DCO) drove down the dirt track roads from the neighboring military base towards the small village of Susiya. The purpose of this visit was to serve yet another demolition order, the third since late August this year, to Muhammed Musa Muranam and his family. 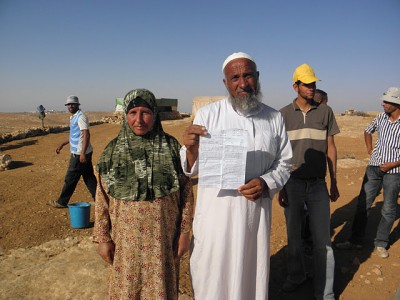 Muhammed has been formally notified by the Israeli authorities that he does not have permission to stay on his land and that he must tear down both his own home and his livestocks’ shelter immediately. If Muhammed refuses, the army will return with their bulldozers to complete the demolition.

Muhammed and his wife live permanently in their tent home in Susiya. if the tents are demolished his family, and their livestock will be homeless. Muhammed has documents proving that the land has been in his family for several generations.

On 11 October 2011 Muhammed told an ISM volunteer that he is determined to stay in his home, and that he will continue herding his sheep for as long as possible.  Muhammed is unwilling, and perhaps unable, to contemplate his family’s future if his home is destroyed.

Susiya has a long history of demolition orders dating back to 1991. In 2001 the whole village was demolished by Israeli army soldiers and their bulldozers. Caves, tents and wells were all destroyed leaving approximately 70 people homeless. The last demolition in the village of Susyia was four months ago. At this time six family homes were demolished (all from the Jabur family). Two of these families have now built and live in temporary tents, the other families have relocated to Yatta. The court case is in relation to these demolitions is ongoing.

It is unclear at this time whether Muhammed will return to the Isreali courts to challenge the demolition order; understandably he has little faith in the Israeli justice system.