On 10th October 2011 at 5am Israeli forces demolished a family home in the village of Al Jab’a, about 15 km southwest of Bethlehem.

The owner, Sheikh Nasri, was farming his land at the time of the demolition. Nasri, 50, had been constructing the house for his family of ten children whilst living in a nearby rented property. He had applied for a building permit, which was still pending. Villagers reported that a Demolition Order had not been presented. 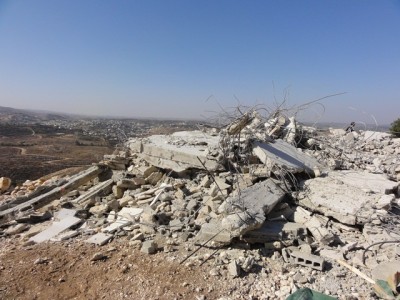 Al Jab’a has a population of around 800 and is near the illegal Israeli settlements of Batayim and Nahal Gebaot. In an interview with ISM volunteers, Sheikh Nasri explained that the location of his village is a cause for daily struggle; they are refused access to much of their farm land by the military and endure prolonged assaults from the settler community. When Shieikh Nasri’s 15 year old son attempted to farm their land, soldiers arrested him, and he was detained in an Israeli prison for over 6 months. On another occasion soldiers refused to allow Sheikh Nasri and his pregnant wife to pass through a check point to get to the local hospital – she was forced to have her baby at home without medical care.

When asked what he plans to do next, Shiekh Nasri remains defiant:

The Israeli wall plan will result in Al Jab’a being besieged by the wall from the north, east and west and bypass road number 367 from the south, effectively isolating it from the rest of the West Bank. Villagers reported that 10 other houses are currently at risk of demolition.