The Palmer/Uribe Report: another attempt by Israel to whitewash murder?

On May 31, 2010, Israeli commandos brutally attacked Freedom Flotilla 1, killing eight Turkish and one American passenger on board the Mavi Marmara, most having been killed at close range, execution style. They injured more than 50 other passengers, both on the Mavi Marmara and on the other four boats sailing to the embattled territory of Gaza to bring the attention of the world to Israel’s illegal blockade of 1.6 million Palestinians. Not only were our passengers murdered and maimed, but the Israeli government has refused to return over $1 million in money and equipment, including cameras and videos which are of evidential value.

In the 15 months since Israel’s unwarranted attack on five boats carrying human rights watchers, Israel has been trying to spin the story that their well-armed soldiers were the victims and we were the aggressors. Several reports have already been written, most squarely blaming Israel for its attack on unarmed civilians.

The UN Human Rights Council Fact-Finding Mission took evidence from 112 eyewitnesses, reviewed forensic evidence, including autopsy reports and inspected the Mavi. It found that, because a humanitarian crisis exists in Gaza, Israel’s blockade is ulawful and ‘cannot be sustained in law…regardless of the grounds” used as justification. Israel’s blockade is collective punishment and in violation of article 33 of the Fourth Geneva Convention, inflicting civilian damage disproportionate to any military advantage. Therefore, since Freedom Flotilla 1 neither presented an imminent threat to Israel nor was designed to contribute to any war effort against Israel, intercepting the flotilla was ‘clearly unlawful’ and could not be justified as self-defense.
Israel refused to cooperate with this UN panel even though the United Nations and governments all around the world called for just such an independent investigation of the events.

Instead, the Israeli government set up its own investigatory panel, The Turkel Commission, led by Israeli retired Supreme Court Judge Jacob Turkel and three other Israelis issued a report on January 23, 2011 exonerating the commandos, then saying the blockade was legal. The commission did not interview a single passenger or crew member from any of the boats but only received testimony from the Israeli military.

On January 28, 2011, Amnesty International condemned the Turkel findings as no more than a whitewash. “Despite being nearly 300 pages long, the report crucially fails to explain how the activists died and what conclusions the Commission reached regarding the IDF’s specific actions in each case.”

Free Gaza shares Amnesty International’s analysis that the conflict between the Israeli armed forces and unarmed civilians was NOT armed conflict, making international humanitarian law (IHL) the wrong framework; international human rights law and law enforcement norms should have been applied, which would have made the use of force – and especially lethal force –an act of last resort.

Now there is the Palmer/Uribe report due to be released tomorrow, which apparently adopts the same faulty IHL framework.

According to Audrey Bomse, Board member and Legal Adviser to Free Gaza : “If the leaks we’ve heard from Israeli officials are correct, the holes in this report are big enough to sail a flotilla of ships through. There are serious problems with the Panel’s composition, mandate and legal analysis. But most disturbing of all is the fact that the Secretary General’s Panel apparently condones Israel’s gross violations of the human and national rights of the Palestinian people and the rights of those in solidarity with them.”

The Panel has 4 members, one from Israel and one from Turkey, plus Geoffrey Palmer, former prime minister of New Zealand and ex-president of Colombia, Alvaro Uribe. The choice of Uribe as vice-chairman is suspect, given his intimate association with the military and paramilitary practice of murdering civilians in Colombia. The Panel, was only tasked to review the reports of the national investigations by Turkey and Israel (the Turkel Committee), not to conduct an in-depth objective investigation. Its ultimate goal, was to “positively affect the relationship between Turkey and Israel.”

International humanitarian law (IHL, the law of armed conflict) is the wrong legal framework to be used as the basis for judging the lawfulness of the actions taken by Israel both against the civilian population of Gaza (the blockade) and against those resisting the boarding of the MM. The conflict between the Israeli navy and unarmed civilians on the Mavi Marmara was not armed conflict. International human rights law and law enforcement norms should have been applied, which would have made the use of force – and especially lethal force –an act of last resort. Nor should the legality of the blockade of occupied Gaza be analyzed in the framework of the law of armed conflict.

If indeed the Uribe Report has concluded that the Israeli naval blockade on Gaza – a serious measure of war – is legal and in accordance with international law, then this Report will contradict numerous other UN reports and resolutions, most recently that of the Human Rights Council Fact-Finding Mission, on the issue of the legality of the Gaza siege.

As the Human Rights Council Fact‐Finding Mission observed, “public confidence in any investigative process … is not enhanced when the subject of the investigation either investigates himself or plays a pivotal role in the process.” 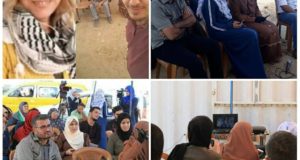