Hundreds of Palestinians gathered in Mina, the port of Gaza City, to remember the nine Turkish activists killed by Israeli naval commandos during their attack on the Freedom Flotilla on 31 May 2010. 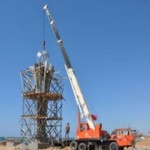 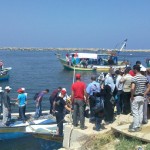 The gatherings occurred over Monday, 30 May and Tuesday, 31 May. The Palestinian NGO Network (PNGO) organized Monday’s commemoration. The Palestinian government in Gaza hosted Tuesday’s dedication of the Freedom Flotilla Martyrs Memorial and Square, a project of the Palestinian Ministry of Public Works and Housing and the Ministry of Transportation.

Both events drew hundreds of Palestinians, as well as the International Solidarity Movement – Gaza Strip and other foreign activists.

“The monument is composed of nine 12-meter-hight sails, symbolizing the nine martyrs, in addition to a metal ball which crowns the top of the edifice,” Yasser Al-Shanti, Assistant Undersecretary of the Ministry of Public Works and Housing, told Alresalah.ps about the Memorial before Tuesday’s unveiling. “The ball symbolizes planet Earth, in a clear indication of this heroic action which drew the world’s attention to the siege of Gaza.”
The Memorial and Square were dedicated following addresses by representatives of the Palestinian government in Gaza and international organizations involved in efforts to end the ongoing blockade, including the IHH Humanitarian Relief Foundation.
After Monday’s ceremony, dozens of participants took to the sea in boats, tossing flowers into the waves to commemorate the shooting deaths of Cengiz Akyüz (42), Ali Haydar Bengi (39), İbrahim Bilgen (61), Furkan Doğan (19), Cevdet Kılıçlar (38), Cengiz Songür (47), Çetin Topçuoğlu (53), Fahri Yaldız (43), and Necdet Yıldırım (32).

The events followed a year after their killings, which sparked global outrage and were condemned by the United Nations Human Rights Council as the products of “[a] series of violations of international law, including international humanitarian and human rights law.” The international reaction forced the Israeli government to modify its occupation policies, which it falsely claimed as an “easing” of its siege on Gaza.

They also came only three weeks before the launch of Freedom Flotilla – Stay Human, which will send 15 ships to challenge the blockade beginning 20 June.