According to the most recent reports 22 civilians were killed and 360 injured yesterday when Israeli soldiers opened fire at protesters marking Naksa day across the West Bank, Gaza Strip, and the Syrian border. The 5th June this year marked the 44th anniversary of the Naksa, or “setback” – Israel’s 1967 occupation of the Gaza Strip and the West Bank and its accompanying expulsion of 300,000 refugees from their homeland.

In the West Bank the International Solidarity Movement joined with hundreds of Palestinians as well as other internationals and Israelis in demonstrating at Qalandia checkpoint in Ramallah. The protest lasted for approximately seven hours and was met with a violent and disproportionate response by the Israeli military who shot teargas and rubber-coated steel bullets at the protesters throughout. The military who were positioned in front of the checkpoint as well as down the street and on occupied rooftops, began shooting at protesters as soon as they neared the checkpoint forcing them back down the road. No consideration was given to safety as tear gas was fired directly at protesters and at moving traffic resulting in approximately 90 injuries. Elsewhere in the West Bank demonstrations were also held in Hebron and Al Wallaje, however no injuries have been reported from these events. In Gaza hundreds of Palestinian refugees demonstrated outside the Erez Crossing in Beit Hanoun. 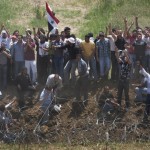 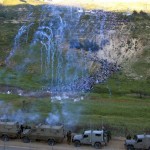 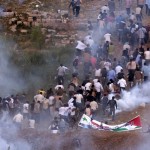 On the Syrian border the Israeli army used live ammunition on protesters as they advanced towards the occupied Golan Heights. 22 unarmed protesters were killed and 270 have been reported injured. This follows the widely condemned excessive use of force displayed by Israeli troops last month at the 15th May Nakba demonstrations which left five protesters dead on the Syrian border.