Villagers of Jaloud protest their electricity being cut

Today the village of Jaloud held a non-violent demonstration against the decision of Israel to cut off the electricity of seven families living on the outskirts of the village. The villagers and several international organizations marched from the village to the aforementioned houses carrying banners protesting the theft of their land and electricity. Jaloud, which is home to nearly 1,000 villagers is, according to the plan of the District Coordinating Office located in area B. However a small number of properties fall into area C outside of this plan, despite being inhabited for over 80 years and have recently been served with notices that they will have their electricity cut off. They have been given a court date of 19th May, where they will be able to object to this decision. Village Mayor Abdullah Haj Mohamd says that he doesn’t know what the families will do if their power is cut as they are reliant on electricity for their everyday life and farm work. 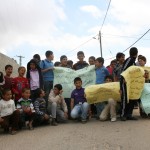 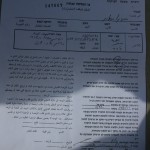 Notification that the electricity will be cut.

Jaloud, which has been inhabited for over 6,000 years is now surrounded by seven illegal Israeli settlements and a military base. Since the beginning of the occupation the village has lost 80% of it’s land to settlements and it suffers from frequent attacks by the settlers, often at night. The village has also been targeted by the Israeli military who three months ago uprooted and removed 200 olive trees the villagers had planted on their land. This most recent move from the state of Israel can be seen as an attempt to prevent the expansion of the village and force families back into the centre, all the while facilitating the expansion of the surrounding settlements.