Protesters commemorate the Nakba at Qalandyia

From 11.00 this morning until 21.00 at night, the International Solidarity Movement joined with thousands of Palestinians and other Internationals in commemorating the Nakba by demonstrating at Qalandiya checkpoint which separates the West Bank from Jerusalem and the rest of pre-1948 Palestine. As protesters united in denouncing the expulsion of Palestinians from their land in 1948, the Israeli army responded to the mass mobilisation with live ammunition, teargas and rubber-coated steel bullets. The teargas used was a different, more powerful type than is usually used during demonstrations and resulted in severe cases of asphyxiation. Protesters resisted the occupation forces by throwing stones. A report from the Palestinian Red Crescent said two protesters were hit with live rounds, 15 were injured by rubber-coated steel bullets, and 120 suffered tear-gas inhalation, however protesters remained undeterred by the military’s disproportionate use of force and continued protesting into the evening. Undercover police officers infiltrated the demonstration, arresting protesters. Qalandyia checkpoint remained open with vehicles moving in both directions as the military fired ammunition and teargas into lanes of traffic targeting protesters. The military also fired teargas at ambulances, injuring medics and making it difficult to access and treat the wounded. 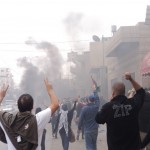 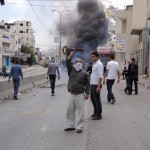 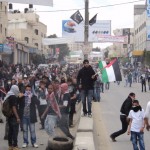 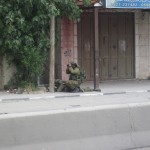 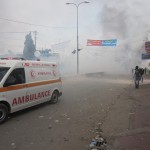 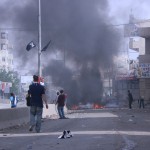