As we approached the wall the Israeli army barked out its hello. A tank began to fire over the crowd and into the sand dunes lining the road. The Israeli bulldozers had already thoroughly destroyed anything that was once on this land, outside of threatening the crowd there was nothing to accomplish by this shooting. It is a strange thing to be fired at with a cannon from a tank; you can almost feel the air shake when the shell explodes. The crowd did not stop, it continued forward, chanting against the occupation, chanting their love of their land.

Soon the stream of wounded began. From the front of the crowd men and boys carried by their friends, by whoever was standing near them when they were shot. They came in a steady stream; you could hear the tak tak tak of the Israeli rifles echo against the calm sky. In the West Bank, the soldiers are usually stationed on a hill, first comes the tear gas, and then come the bullets, usually rubber at first, later the live ammunition. In Gaza there are no pretenses, first the tanks fire their cannons, then the soldiers safe in their concrete tower start to shoot live ammunition into the crowd.

The crowd, maybe a thousand strong by now, is strung out along the street. Their only cover the concrete lane separators. Above them, Apaches hover, not for the whole protest, but they come and go; perhaps they will fire missiles into the crowd. It is pretty hard to imagine what possible use an Apache has in crowd control. Then again it is hard to imagine the possible uses of a tank for crowd control, yet off to the right of the crowd an Israeli tank shelters behind an earth berm. In front of them is a giant concrete tower manned by soldiers who shoot into the crowd. Underneath this tower there is some sort of room, apparently for people crossing the terminal. Occasionally you see soldiers there; they seem to be playing with a luggage cart. It is hard to imagine that they are afraid for their safety. Off to their left is another giant concrete tower, this one has a very large gun mounted on top of it.

Saber says: “On the tower in front of us there is a sniper, he does not miss a shot fired: every bullet achieves exactly the target. The tower on the left is fitted with a remote control machine that shoots projectiles with a caliber much bigger, those are illegal under international law.” The danger is increased by the fact that the direct line between the remote control gun and the protesters is obstructed by bushes, which obscures visibility and makes accurate aim less likely. None of the Palestinians are carrying weapons, none are a real threat to Israel. This is the first event since the agreements were signed for national unity: there are those who bare obvious signs of Fatah, Hamas and the PFLP. All sectors of the population are represented including women and children. Nalan a girl of twenty-one years, says “I wanted to go further in the front row, because is my land, and I wanted to go further. But my friends pulled me back and wanted to keep me safer …”.

The hours pass, the soldiers continue to shoot into the crowd. The wounded trickle to the back, shot one by one. The soldiers sit safely in their concrete tower firing into a crowd a hundred meters away. You can only imagine how they decide who to shoot. They can’t possibly feel any threat; they young men barely even bother to throw stones. The wall, the tower, are too far away for a stone to even reach them. The stones that are thrown are thrown almost on principle, if you are going to stand in an open street while soldiers shoot you from their concrete tower, surely you should do something.

Three young men try to put a flag up on a light pole. The soldiers start to shoot at them. They hide in a jumble of concrete blocks at the base of the light pole. When the shooting pauses, they try again to put up their flag. As soon as they emerge the firing begins again. This pattern is repeated several times. Finally the soldiers start firing some sort of heavy machine gun at the boys; everyone realizes that the situation has become much more serious. Soon, the boys will be killed. A young man from the crowd joins them, and tries to convince them to make a run for it, to leave the shelter of the rocks for the shelter of the crowd. He fails. Men from the crowd try to convince people to walk over en mass and take the boys out, they can’t convince enough people, people are too afraid that the soldiers will shoot them. Finally, the boys realize that they have to move; one by one they make a run for the crowd. Thank god they all make it.

The soldiers start shooting again; I feel a punch in the chest. Probably just a ricocheting piece of stone, the young boy next to me was not so lucky. When I look over he is being helped away, his face streaming blood. It looks like he has a hole in his cheek, like he was shot in the face. I never see him again, surely he wasn’t shot in the face, it is hard to imagine him living through that.

A boy next to me is shot in the leg. You can see that his leg is shattered even through his pants. When they pick him up to carry him to ambulance his leg hangs as if in two pieces. He doesn’t scream, he doesn’t say anything, but you can see the fear and pain in
his face. He seems to be about 14. What were the soldiers thinking? That this young boy, 100 meters from their concrete tower was somehow a threat to them? It is strange, none of the wounded seem to scream, perhaps you just don’t notice, I don’t know, but I don’t remember any screams of pain, just the look of fear and pain on young faces.

After about three hours of shooting live ammunition into the crowd the soldiers decide to try something new, well, new for the day, but familiar to all Palestinians. They begin to fire tear gas into the crowd. The crowd surges back to escape the tear gas. The soldiers aren’t very committed though, after one volley of tear gas they return to shooting live ammunition into the defenseless crowd. If this were Libya, Syria, the world would denounce the use of live ammunition on a crowd of unarmed people who pose zero threat to anyone, but this is Gaza, shooting unarmed demonstrators is a given.

A young man walks forward alone. He keeps walking toward the wall, you can feel the tension, the crowd is worried that he walks toward his death, brave but suicidal. The soldiers don’t shoot; he comes closer to the wall than anyone has in hours. He takes a Palestinian flag that has been left there; he walks slowly back to the crowd. He is greeted like a hero. The soldiers go back to shooting random young people from the crowd.

After leaving the protest we went to visit some of the wounded in the hospital. They were
already out of the emergency, resting in beds, six to a room surrounded by their families.

Ahmed Gomaa Abd Al Malik is 17 years old. His family lives in Beach Camp, but they are from Deir Sneid where they were expelled in 1948. He was one of the first injured in the protest, shot at 11 am. He went to today’s protest to return to his home, to return to Deir Sneid, the village of his forefathers, his land. He says that he will not forgot his land, Israel should know this, he will return.

Mustafa Saif Abu Saif lies nearby. He is pale, he looks tired. He is only 14 years old, one of the many kids shot today. His family are refugees from Jaffa, now they live in Jabalia Camp. He was shot near the wall. He had found an Israeli flag and brought it to be burned, while he and his friends were trying to burn the flag the soldiers shot him. He asks that the world wake up to what Israel is doing in Palestine, that they assist the Palestinians in any way that they can.

Yehia Adel Al Shareef is the oldest person we meet today who was shot. He is 23. His family lives in Beach Camp. He has no idea why he was shot, they just shot him.

Shadi Rayan is 19 years old. He wants to return to his homeland, to the village which his family was expelled from in 1948. He doesn’t want the world to forget that 63 years later, his family is still refugees; their right to return to their land is still being denied. He was shot at 3:30 while he tried to hang a Palestinian flag.

These are only some of the casualties. According to the Palestinian Center for Human Rights, one 18 year old boy is dead and the total number of wounded is 105, including 31 children, three women and three journalists. The injured were taken to three different hospitals in the Gaza strip, and incredibly, some of those with minor injuries returned to the demonstration after being treated at the hospital. Others preferred to stay at the demonstration rather than be taken to the hospital; for example a man with a wounded leg, his trousers torn and stained with blood, tied a flag around his bleeding leg and continued demonstrating.

The shooting continued for over 5 hours. The Nakba has continued for 63 years. Hopefully we will not have mourn the 64th anniversary of the Nakba. 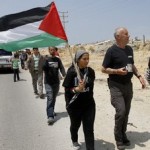 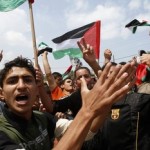 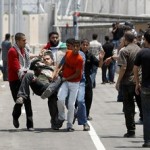 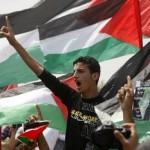 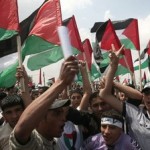 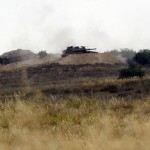